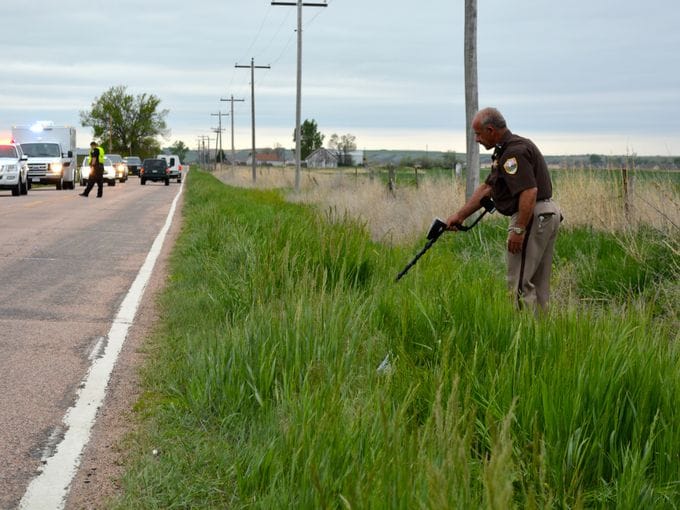 A Weld County Deputy searches the roadside near where 48-year-old bicyclist John Jacoby was shot and killed this week. (Photo: Erin Hull/The Coloradoan)

Organizers of the Pelican Fest Sprint Triathlon have pulled the plug on the event scheduled for this weekend following the death of cyclist just a month after a motorist was shot in the same area.

Citing concerns that the Windsor Police Department and Weld County Sheriff had their hands full and could not provide security for the event in the normally low-crime area, race officials decided to shelve the event for this year out of an abundance of caution as well as to help free up police resources.

“I have decided to cancel this weekend’s event in lieu of the shooting that occurred in Windsor yesterday,” posted race organizers on the event’s social media account. “It is not known yet if this shooting is related to the windows also being shot out on I-25 in which a lady was hit in the neck.”

Killed along County Road 15 near Windsor was John Jacoby, 48, who was shot twice while bicycling Tuesday. With no leads or arrests, local authorities have called in the Federal Bureau of Investigation to assist in the case, which is the area’s first homicide in eight years.

“As far as our involvement, we are assisting in a law enforcement capacity and providing resources as needed. We cannot comment further as this is an ongoing, active investigation,” advised FBI Special Agent Amy Sanders the Coloradoan.

The death of Jacoby came just after a series of unsolved incidents involving motorists along Interstate 25 in Northern Colorado in which at least nine windows were shattered.

Then, in late April, 20-year old motorist Cori Romero was shot in the neck while along the corridor near Windsor. That incident, under investigation by the Larimer County Sheriff’s Office, has not produced any arrests or suspects.