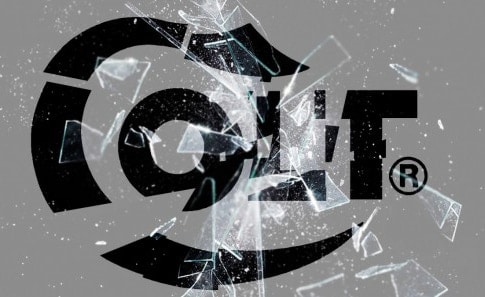 Colt has a history of financial troubles, dating back to the founder, Sam Colt. (Photo: The Firearm Blog)

Colt Defense LLC’s credit rating has been cut to the lowest level possible after the Connecticut-gun maker skipped an interest payment and extended its deadline for creditors to approve either a debt exchange or a prepackaged bankruptcy plan.

Standard & Poor’s downgraded both Colt’s debt rating and corporate credit rating to a “D” from “CC,” the rating service said in a statement Tuesday.

The “D” rating means a company has failed to pay one or more of its financial obligations when it came due, and it is assigned when Standard & Poor’s believes that a company is on the brink of bankruptcy or officially declares it.

The company missed a $10.9 million semi-annual payment to bondholders last week, something it was able to make in November thanks to a last minute loan.

Although Colt has not yet declared bankruptcy, it is trying to prevent it or at least soften its entry into bankruptcy. The company is in the midst of an exchange offer that would allow bondholders to trade old secured notes for new ones set to payout at a higher interest rate at a much later date. But few investors are biting at the chance and Colt has had to extend the deadline for the offer twice due to lack of participation.

For the offer to be successful, Colt needs 98 percent of investors to participate, but the company has only accounted for $14.1 million, or 5.65 percent, of the outstanding principal.

Standard & Poor’s also gave Colt a recovery rating of “6,” meaning there’s a zero to 10 percent expectation of recovery in a default scenario.

Colt has been funding operations on a series of loans for the past year, swapping debt for debt.

In the statement, Standard & Poor’s said Colt’s rating can be raised since the company has a 30-day grace period to make the semi-annual payment to bondholders before defaulting on the payment, but it’s unlikely.

“We do not expect the payment to be made within the stated grace period given the company’s heavy debt burden, which we view as unsustainable,” Standard & Poor’s said.

The grace period for the payment ends June 15, but the deadline for the exchange offer is set for May 26.