Some school faculty could carry in Oklahoma under new law 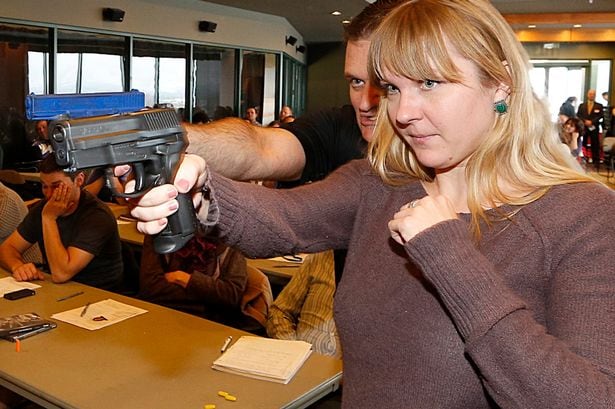 A measure to allow approved faculty to carry firearms in Oklahoma schools by designating them as special reserve school resource officers was signed into law this month. (Photo: AP)

Authorized employees in school districts across the Sooner State can be trained and designated as reserve officers, allowing them to carry guns on campus under the egis of a new law signed by Gov. Mary Fallin.

The measure saw widespread support on its travel through the Republican-controlled Oklahoma state legislature, passing the House by a 84-2 vote in March and the Senate 40-5 on April 22 before its transmittal to the governor’s office. It would allow designated teachers or school staff to carry firearms after first attending training. Supporters characterize the legislation as giving educators a line of defense in the case of an active shooter event.

“If that worse case situation occurs, there is the potential for an armed response on the part of the school to stop a perpetrator with deadly intent,” said Rep. Jeff Coody (R), the measure’s sponsor.

The new law, which passed as HB 2014, the Special Reserve School Resource Officer Act, allows school boards in the state the ability to authorize specified employees to carry a handgun on school property. As part of this, the board can first specify that the faculty member attend either an armed security guard program or a reserve peace officer program and allocate funds to pay for such training or licensing as required.

The broadly popular bill was embraced by the Professional Oklahoma Educators association. According to a statement posted from the organization, in a recent annual survey of its members the organization found support for legislation that would give options to school districts to protect their students.

“We cannot play games anymore. These are the lives of our children,” said POE Executive Director Ginger Tinney.

Tinney’s remarks and the Oklahoma bill in general are indicative of the move towards increased school security in the nation following the 2012 mass killing at Sandy Hook Elementary in Newtown, Connecticut.

According to a study released this week from the National Center for Education Statistics, nearly three quarters of schools surveyed across the country have increased their security since that attack. Further, some 88 percent of schools responding stated they had written plans in place for a response to an active shooter scenario and in most cases drill for such events.

However, some states are moving in the opposite direction when it comes to allowing armed faculty. In a bill currently tracking through the California Assembly, lawmakers are proposing to remove the current ability of teachers, staff and school visitors with concealed carry permits from carrying on campus.