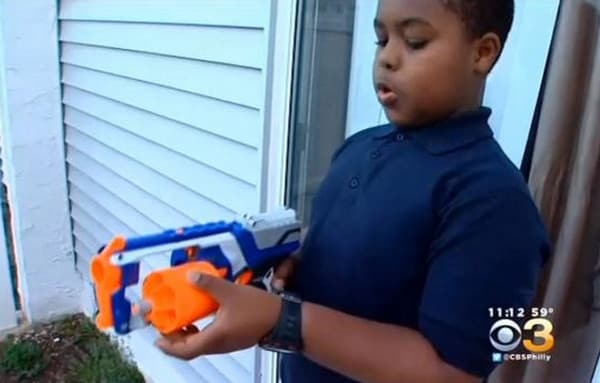 The child said he had no intentions of hurting anyone, he just simply forgot the foam dart was in his pocket. (Photo: CBS)

A fifth-grade student returned to school this week following five days of suspension from a New Jersey school a “self-constructed weapon” made from a foam Nerf bullet and a toothpick.

The child’s mother, Michelle Moody, told a local CBS affiliate school officials said the “weapon” appeared to look like a homemade shank, an idea which she said was “completely ludicrous.” Eleven-year-old Aarin explained he puts toothpicks through the end of the foam projectiles to make them stick into the ground when shooting his Nerf gun at home.

“I could understand if he had the [toy] gun in class and tried to shoot someone, but he didn’t,” the boy’s mother told Fox News. “All he had was the dart with a broken toothpick in it.”

Aarin said he simply forgot that he had the dart in his pocket and when he pulled out a late slip to hand to his teacher, it fell out and she saw it. The child was immediately taken to the office, complete with a security guard escort.

“They want me to like say that I did it on purpose, I put it in my pocket to hurt someone,” Aarin said.

The principal originally pushed for an expulsion, but settled on a five-day in-school suspension and a permanent mark on the child’s disciplinary record. Aarin’s record will now show that he was in possession of a self-constructed weapon, which according to the school’s policy, a weapon is “anything readily capable of lethal use or inflicting serious bodily injury.”

Although Aarin returned to school Monday, he remains on probation.

Still, the boy’s mother is upset that he missed out on valuable classroom instruction time while on suspension. She said Aarin attends the special school because he has been diagnosed with ADHD and has had anger management issues in the past. She feels the school singled him out over something minor.

“It’s mind baffling to me that someone would even take something as small as this to the highest extreme,” Michelle said.