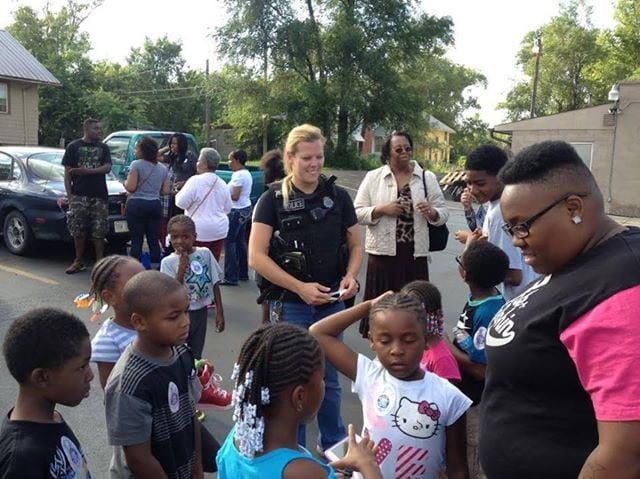 A 29-year-old Omaha police officer was shot and killed while pursuing a suspect Wednesday during her last shift before she was due to take maternity leave.

Kerrie Orozco, a seven-year veteran of the force, had given birth prematurely to a daughter, Olivia Ruth, in February. The baby has spent her first three months in the hospital and was due to be released and come home for the first time Thursday. After having the baby, Orozco postponed her maternity leave until she was able to spend the time with the baby at home, but the young mother will never get that chance.

Orozco, who was part of the department’s fugitive task force and also worked with the city’s gang unit, was involved in the pursuit of 26-year-old Marcus Wheeler, a known gang member and convicted felon who was wanted in connection with a prior shooting. As officers closed in on Wheeler, who was armed with a semi-automatic handgun, he opened fire with a hail of bullets, striking Orozco in the chest, just above her bullet-proof vest, according to reports from NBC News.

Officers returned fire and Wheeler was shot, but fled from the scene. He was found a short distance from where the shootout occurred, collapsed on the ground, and later died at the hospital.

Officer Jeff Shada, who has been with the department for 27 years, immediately came to Orozco’s aid after the shooting, and frantically shouted over the radio for assistance. Two additional officers came on the scene and began administering CPR on Orozco before she was rushed to the hospital, accompanied by about 20 officers, reports indicated. Attempts by the hospital’s trauma team to save Orzco were unsuccessful.

“The community owes a great deal to such a wonderful person,” Police Chief Todd Schmaderer said in a statement Thursday. “Her loss will not only impact the police officers but will also be a huge loss for the citizens of Omaha.”

Orozco was active in the community, coached youth baseball for the Boys and Girls Club and volunteered with the Special Olympics and Girl Scouts.

Teen director for the Boys and Girls Club, Abdul Muhammad, said Orozco was the “bread and butter” of the program and was always trying to figure out a way to get all of the kids involved in every game.

Orozco, who was the first female officer in Omaha to be killed in the line of duty, was survived by her husband of four years, Hector, and two stepchildren: Natalia, 8, and Santiago, 6. The stepchildren’s mother asked that all donations be directed towards baby Olivia, because the focus needs to be on her at this time.