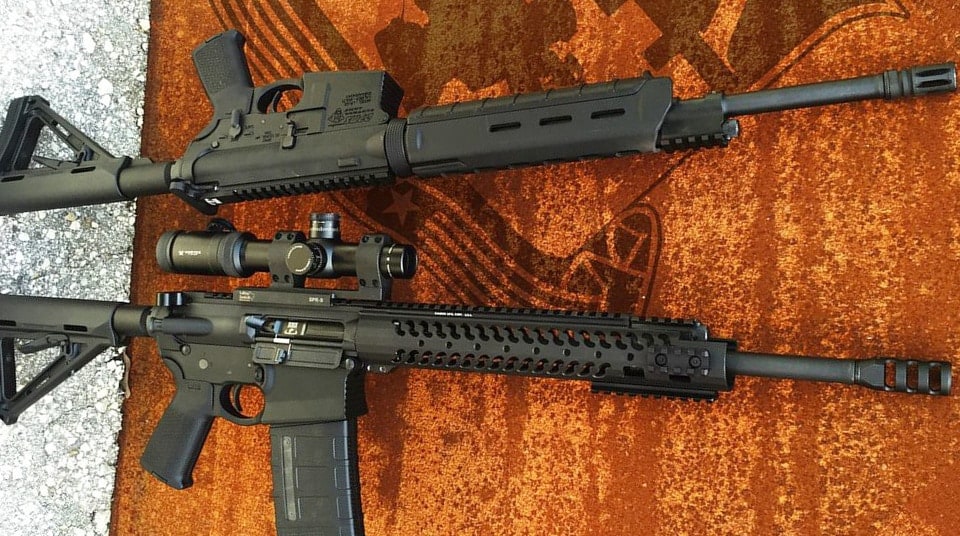 Adams Arms is now selling their short-stroke gas piston-operated .308 Winchester DPMS-pattern uppers separately, for shooters who already have DPMS-pattern lowers looking to get into the piston game while potentially saving a little scratch on the side.

With the increasing popularity of .308 Win. ARs, people have a lot more options when it comes to lowers than even just a year or two ago. Like with intermediate-cartridge AR rifles, it can be cheaper to buy a complete assembled upper and build your own lower from parts kits.

Buying an upper separately also means that users can customize their lowers during the assembly process, with their own selection of parts and accessories including the stock, pistol grip and trigger.

Introduced at the top of this year Adams Arms’ .308 rifles have proven to be accurate and soft-recoiling compared to other .308 ARs. They have two uppers, the Patrol Battle Rifle, a practical-tactical model with a free floating handguard, and the Patrol Enhanced, which is more of an all-purpose upper at a lower price point.

The Patrol Battle Rifle upper features a Samson Manufacturing modular handguard and beefy muzzle device by Voodoo Innovations, their sister company. The three-baffle JetComp provides a lot of control at the muzzle and lends the upper a little competition rifle performance to its duty rifle nature.

The Patrol Enhanced upper has a more conventional A2-style birdcage flash hider. The time-tested design is still one of the better performers out there for reducing visual signatures. Combined with Magpul MOE handguards, the Patrol Enhanced upper is a relatively straightforward upper that will do just fine in just about any role, be it hunting rifle, self-defense, duty or making noise at the range.

The uppers are fully-assembled and come with everything you see here, including the LifeCoat BCGs. (Photo: Adams Arms)

Both uppers include their enhanced bolt carrier groups with their LifeCoat finish, which is a polished physical vapor deposition or PVD coating on top of an electroless nickel plated base layer that’s not only incredibly durable and wear resistant, but also has extra lubricity compared to traditional finishes like parkerization.

Another nice touch is an enlarged “kidney” ejector in the bolt for more reliable ejection. Adams calls it a Brass Saver design that’s made to be reliable and kind to cases, a benefit for reloaders or anyone who polices their brass for resale.

By selling the uppers alone Adams is able to knock off almost $500 off the sticker, although shooters will need some type of DPMS-pattern lower to use them, of course. The Patrol Battle Rifle is listed at $1,249 and the Patrol Enhanced $999.

If you’re interested in Adams’ short-stroke gas piston rifles and uppers but not into .308 Win. ARs right now they’re having a Memorial Day sale on their .223 Remington/5.56 NATO uppers and lowers.