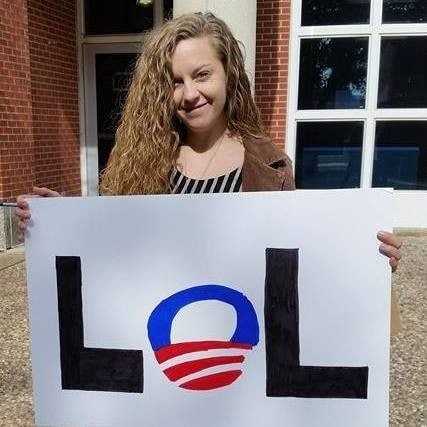 A Houston college student sued her school last week over claims the institution infringed on her constitutional right to free speech.

The incident occurred Feb. 2, when Nicole Sanders and other students were collecting signatures for the formation of a new student club chapter of Young Americans for Liberty, a libertarian and conservative youth organization.

According to the complaint, students held politically charged signs, one ridiculing the Obama administration and the other promoting gun rights on campus, but were doing so outside the university’s free speech area.

The students were told by a Blinn College administrator that they would need “special permission” to display signs, handout flyers and collect signatures, according to the Foundation for Individual Rights in Education, a civil rights organization for students that aided Sanders in filing her lawsuit.

“Blinn College administrators sacrificed the First Amendment in order to stop Nicole from talking about the Second, Fourth, and Fifth Amendments,” said Catherine Sevcenko, FIRE’s associate director of litigation, in a statement. “But public colleges like Blinn are bound by the First Amendment, which gives all citizens – including college students – the right to speak out on the issues they are passionate about, whether gun rights or gay rights.” 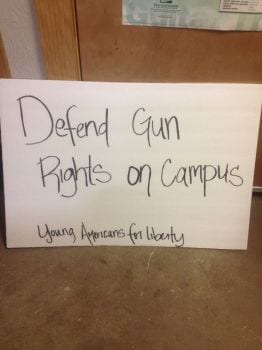 After about an hour and a half, the group was able to collect 40 signatures before being asked to stop, Sanders wrote in a blog post the following month.

The complaint further contends the school’s flyer approval process is unconstitutional. All such material needs to be approved for distribution by the college, which “shall designate times, locations, and means by which non-school literature that is appropriate for distribution … may be made available or distributed by students or registered student organizations to students or others at College District facilities.”

The student expression policy also lacks time limits for how long students should expect administrators to return a response to requests, the complaint reads. Sanders submitted a sample flyer with information about the Fifth Amendment printed on it to the school’s administration in late February and didn’t receive word of its approval for almost two months.

Sanders’ lawsuit isn’t the first that seeks to rid a Texas campus of free speech zones – which exist on colleges across the country – It’s actually the second, The Houston Chronicle reported. A federal judge in 2004 ruled a Texas Tech University’s 20-foot wide, 40-person free speech gazebo limited free speech and requiring students to protest only there violated their First and Fourteenth Amendment rights.

The same foundation fought in that case and the Blinn College suit marks its 10th – with five settling out of court and the schools agreeing to abolish their free speech zones, The Chronicle reported.

“I hope this will make all of Blinn College a free speech area and maybe that more students will be interested in starting clubs without having to jump through hoops just to talk to students they go to school with,” Sanders told The Chronicle.