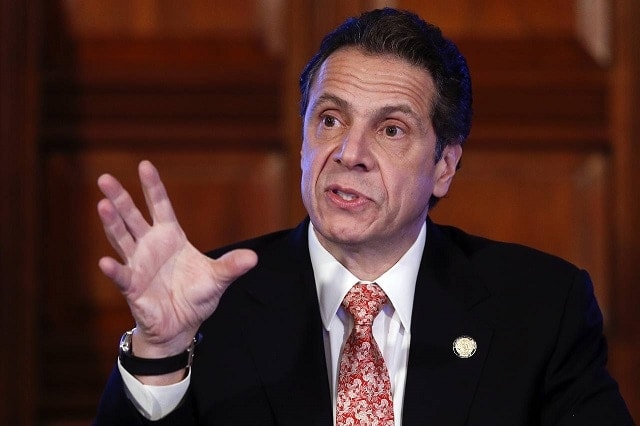 Gov. Andrew Cuomo (D) announced over $13 million in funds for 17 counties in New York outside of the Big Apple to fight gun violence. (Photo: Mike Groll/AP)

New York Gov. Andrew Cuomo on Tuesday announced a round of anti-gun funding grants to agencies and departments across the state, some already controversial for their gun control tactics.

The grants, issued to 17 counties served by 20 law enforcement agencies through the Gun Involved Violence Elimination initiative, totaled some $13.3 million.

“This administration has worked tirelessly to combat gun violence in New York and prevent the needless tragedy that comes with it,” Cuomo said in a statement. “Through the GIVE initiative, we are giving law enforcement agencies more resources necessary to fight gun violence in our streets in order to save lives and make communities across this state safer.”

The funds allocated in the GIVE initiative, are to go towards law enforcement overtime, training and community outreach, as well as funding prosecutors, intelligence specialists and crime analysis who target illegal guns.

However, some of the agencies receiving the funds have in the past made names for themselves for their zealousness in going after firearms by using what some contend are unorthodox methods.

Splitting more than $1.75 million in GIVE money will be the Buffalo Police Department, the Erie County District Attorney’s Office and Sheriff’s Office.

Last November BPD was called, “ghoulish” for its practice of visiting the homes of those recently departed in search of firearms as part of a new plan to help keep tabs on local guns. This came as the city defended its efforts to buy back guns despite the contention of gun rights advocates that the events do little to stop crime.

Although the Suffolk County Sheriff’s Department was named in a federal lawsuit for pulling the firearms permit of a U.S. Navy veteran and retired police detective following his treatment for insomnia five months ago, the agency is splitting almost $1.1 million in GIVE funds with the county DA.

The Nassau County and Hempstead police departments and District Attorney’s Office, Sheriff’s Office and Probation Department will share more than $1 million in money from the state program. It is unclear if the funds will help go for long term storage on the $100,000 firearms collection of Marc Weinstein, a former New York City Fire Department member disabled following injuries received because of the terrorist attack on the World Trade Center on Sept. 11, 2001, who now occupies his time as a competition long-range rifle shooter.

Nassau authorities are currently defending themselves against a suit from Weinstien in federal court to return his collection, which they confiscated after a call to his home last February. While the call was ostensibly for a domestic disturbance, attorneys for Weinstein told Guns.com earlier this year there has never been a substantiated case of domestic abuse in the household.

The Niagara Falls Police Department and District Attorney’s Office, Sheriff’s Office and Probation Department will share $696,367 in GIVE funds. Niagara has been on the forefront of enforcing the New York Safe Act mandates, seizing the guns of a concealed carry license holder in 2013 after the man was charged with violating the act’s seven-round magazine limit – a charge that was later thrown out of court over concerns of an illegal search.

GIVE funding will allow agencies to further integrate what is termed “hot-spots policing” which targets areas where crime is believed more likely to occur, “focused deterrence,” in which authorities identify chronic offenders for enhanced attention that includes increased access to social services and street outreach workers.

Interrupters, drawn from former gang members who have been reformed, aim to reach out to head off retaliatory shootings and negotiate disputes in their areas in an attempt to keep the peace. They also form a point of contact to win the hearts and minds of current gang members and supply them with information on alternative support services.

The GIVE initiative began last year and is a reboot of Operation IMPACT, an anti-crime program implemented in 2004 to assist 17 New York counties that account for more than 80 percent of violent crime in the state.

That program was criticized for its frequent tactic of flooding high-crime areas with rookie cops using controversial stop-and-frisk policies in an effort to curb violence.