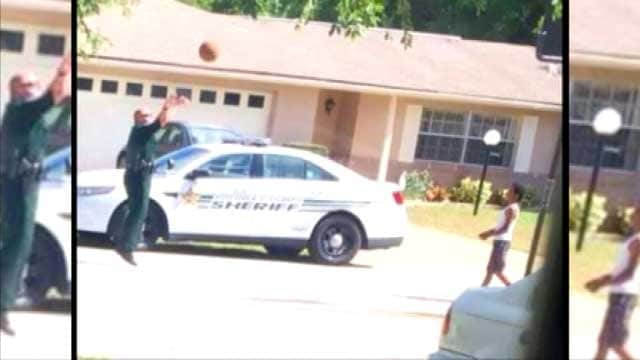 “You played basketball with a cop?” the officer asked 10-year-old Joseph Cantres as he approached him on a Deltona street Sunday afternoon.

Cantres and some friends had been playing basketball in the street while the Volusia County Sheriff’s deputy was out on patrol. The deputy stopped, and dressed in full uniform played a game of horse with the youngsters.

Joseph lost the game, but he didn’t seem to mind.

“He wanted to see how good I was,” he said. “He did alright, he didn’t do better than me cause, you know, I just didn’t want to give it all.”

Meanwhile, Joseph’s father, Jose, witnessed the game and snapped some photos and took a little video, which has since been shared across social media. Jose said he’s glad the deputy stopped and he hopes the act will help his son to understand that not all cops are bad.

“He was just quite surprised that the officer got out the car and was willing to play ball with him,” the boy’s father said.

And Joseph is ready for a rematch, with a message to the deputy, whose name is not known.

“The next time you come over, you’re definitely going to go down and you’re not going to beat me,” he said.