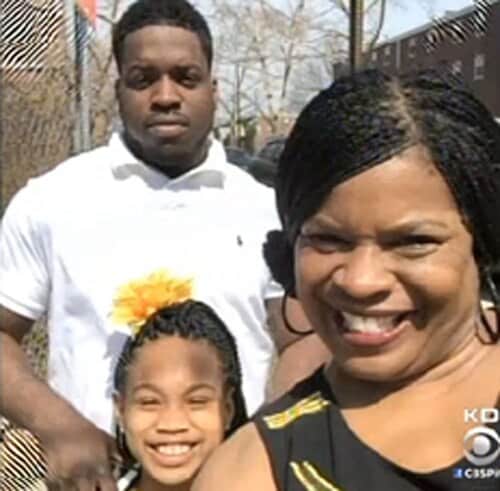 Jacqueline Graham on Easter Sunday with her son, Christopher, and granddaughter, whose mother was shot and killed nearly eight years ago. (Photo: CBS)

After losing a second child to gun violence last month, one Pittsburgh mother is speaking up and asking those in the community for help in breaking the violent cycle. The grieving mother’s focus isn’t on guns, but rather the people of the neighborhood who have remained silent, unwilling to speak to authorities.

Jacqueline Graham had just attended church on Easter Sunday with her granddaughter and son, 20-year-old Christopher Graham-Richardson, when she received the horrifying news. As Christopher rode down the street in a silver Volvo with two friends, after leaving the church service, someone opened fire directly into his vehicle. All three occupants fled from the car once the gunfire erupted.

An officer who was nearby at the time heard the gunshots and responded to the scene. Pittsburgh Police Department spokeswoman Sonya Toler described the scene as having “a lot of gunfire.”

Responding officers located the three people who were in the car. They had all been shot and were all transported to the hospital. Christopher died a short time later, while his friends survived.

Nearly two months later, police still do not have any suspects in custody.

“The two boys with my son in the car lived,” Graham told a local CBS affiliate in an emotional interview. “They saw the killer, but will not talk to detectives.”

Graham said the problem is that people refuse to speak up, even when they have information about a violent crime, and it’s an issue in violence-riddled cities across the country.

This isn’t the first time Graham has dealt with a tragic loss either. Nearly eight years ago, Graham’s 20-year-old daughter, Shalane, who was pregnant at the time and had a 2-year-old daughter, was also shot to death after opening up her home to her homeless cousin, Deaundra Williams. The act left the family both saddened and in shock.

Williams, who said he was drunk at the time and didn’t remember shooting Shalane in the head, was later convicted of third degree murder for the death of his cousin and her unborn baby.

Graham said the streets her children grew up on are now the very streets on which they’re dying.

“We need our communities to start standing up,” she said, no longer able to fight back tears. “We got to take a stand, because I promise you, it’s my son today, it could be yours tomorrow.”