Davidson's and Springfield team up on FDE XD-S 3.3 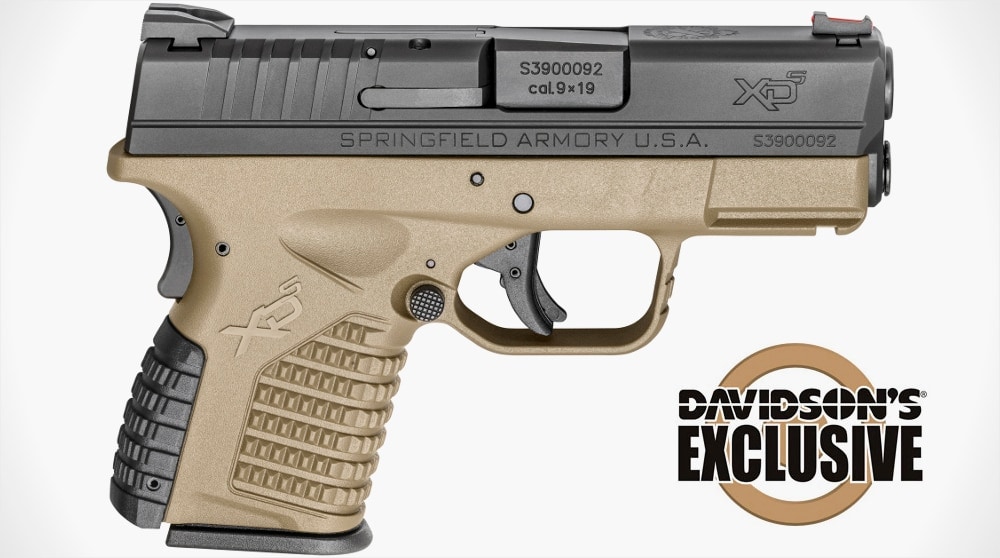 Firearms distributor Davidson’s has partnered with Springfield Armory on a new, exclusive two-tone black and flat dark earth XD-S single-stack pistols for concealed-carry. For now the 3.3-inch models are getting the FDE treatment in both 9mm Luger and .45 ACP.

Like the original XD-S models the FDE version features interchangeable backstraps to better fit different hand sizes. The XD-S immediately earned a reputation as a shooter with its aggressive but not scratchy grip texture that gives users a level of control more commonly-associated with full-size pistols.

Everything else people have come to expect from the FDE model is there, including the high-visibility red fiber-optic front sight and hard, corrosion-resistant Melonite finish. Each pistol comes with two magazines, one flush mag and one +1 extended mag. The 9mm model has a 7+1 capacity with flush mags and the .45 ACP version 5+1. Additional +1 and +2 magazines are available in both calibers for up to 9+1 capacity in 9mm and 7+1 in .45.

For several years now the XD-S has been one of the more popular striker-fired single-stack pistols owing to its compact size, durability, machining quality and low felt recoil. Even after slogging through a significant recall these guns are trusted to protect lives all across the nation.

A lot of shooters like the multiple passive safeties including a grip safety, trigger safety, firing pin safety and out-of-battery safety, in addition to the mechanical and tactile loaded chamber indicator. Spec-wise they’re just the same weighing in at around 23 ounces unloaded in 9mm and 21 in .45 and use all the same sights, holsters, magazines and everything else XD-S.

Davidson’s is offering the pistols with Springfield’s “Essentials” package, which is their no-frills kit without a ton of accessories. This helps keep prices down with a suggest retail price of $499 for the 9mm and $549 for the .45. Typically real-world prices are lower than MSRP but these are special edition pistols so predicting prices can be a little more difficult. It’s safe to say they’ll both be priced around $500, give or take.

If you’ve been thinking about picking up an XD-S but want something a little different — maybe this isn’t your first single-stack concealed-carry pistol — than keep your eyes peeled for the new FDE model.