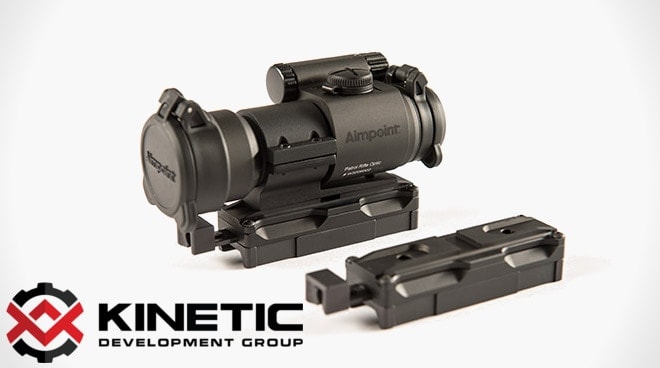 The Kinetic Development Group, or KDG, is taking a new approach to mounting optics on rifles. While there are a dozen or more mounting systems out there, as long as they’re built for flattop rails, they generally use the same or similar principles.

After years of refinement and competition most of these systems can be counted on in the majority of situations, and as long as it’s not from the bargain bin most mounts do their job as advertised. It’s not mounting that’s generally an issue, it’s re-mounting.

Regardless of the reason for removing an optic — be it reacting to an emerging situation or conforming to the rules of the game — when it comes to re-installing even just a simple red dot sight can be a real task. Depending on the optic, the mount and the rail, some systems just do not reliably return to zero.

With most mounts and most applications there’s an acceptable loss of zero. A 1 or 2 MOA shift is acceptable most of the time, but that doesn’t mean it’s welcome. The new KDG system, called Sidelok, uses springs to provide tension and deploys locking bars that grab onto the angled corners of Picatinny rails. By clamping onto the corners the rail provides three consistent axis to set, and to return to zero against. 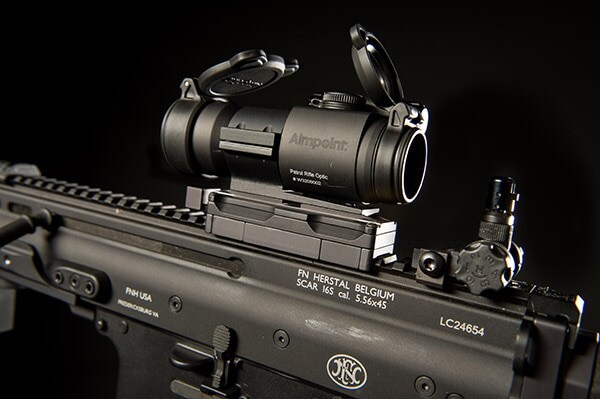 The mount is smooth on both sides, a very welcome feature to anyone who’s got a rifle with a side charging handle. (Photo: KDG)

Sidelock’s spring-powered cammed locking system ensures that the amount of tension used by the locking bars remains constant, removing much of the human element from the mounting process — “You can’t screw it up,” explains KDG.

Of course only testing in real-world scenarios will prove things out for KDG and their new Sidelok mounts, but they’re confident with the system. Right now the Sidelok mounts are compatible with Aimpoint Patrol Rifle Optic or PRO, Comp M4 and the C3 model red dot sights. They are also producing a Sidelock riser for use with the mount. KDG will release a mount for the Aimpoint Micro family of red dots and compatible sights next.

Not all shooters have the luxury of owning multiple uppers or rifles, each built for a purpose, and that’s especially true for those serving in the military and with law enforcement who are issued one carbine and asked to do many jobs with it. A red dot that can be installed and re-installed and maintain its zero can literally be a lifesaver.

The advantage isn’t lost on those not serving a life of duty. A single well-built rifle can be an extremely flexible tool, suitable for competition, home defense, putting food on the table and enjoying time at the range. That doesn’t mean a red dot sight is the best optic for every shooting role and having a mount that returns to zero when its re-assembled as a nightstand gun is more than a little reassuring.

KDG’s Sidelok system is designed to do just that, while maintaining ease of installation and removal. It’s a narrow mounting system with the locking switch at the front of the mount. This makes inherently ambidextrous as well as pretty much incapable of interfering with any type of charging handle.

Priced at $139 it’s also pretty affordable. The Sidelock Mounts are competitive with a lot of Aimpoint mounting solutions, even leaning towards the less expensive end of the spectrum. Risers are sold separately for $99. If you’d like to learn more about the Sidelock system, head over to the Kinetic Development Group website.