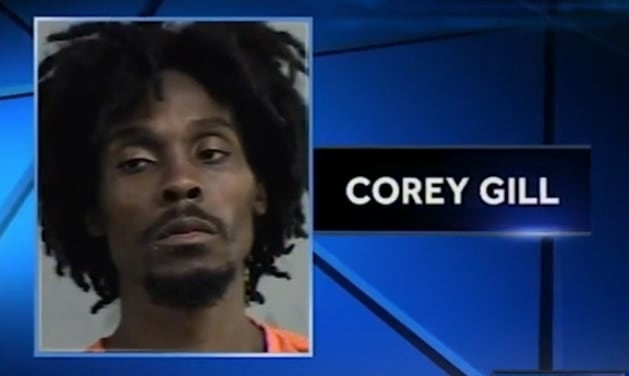 Corey Gill was charged with burglary and possession of drug paraphernalia. (Photo: WKLY)

As a group of siblings struggled to keep a strange man from forcing his way into their home last week, the frightening situation came to an end when the kids’ father heard their screams and grabbed his gun.

The incident unfolded on May 19 just before 6 p.m., WKLY reported. Kenneth Sykes was taking a nap in the back bedroom of his home, and his fiancee was inside going about her day while the children played in the front yard.

When a strange man approached the home, the kids ran inside, but the man tried to follow them. As the man attempted to force his way through the front door, the oldest girl – who is 13 years old – and Sykes’ fiancee struggled to get the door closed.

By that point, the terrified children were screaming.

“I just hear screaming,” Sykes recalled. “Not like the fun, we are having too much fun screaming. It is like screaming and crying.”

Soon thereafter, Sykes’ youngest daughter ran into his bedroom, and the father’s first reaction was to get his gun, protect his family and protect his home.

The kids had managed to close the front door by that time, but the man, who was later identified as 31-year-old Corey Gill, was still outside, running along the side of the house. So Sykes, with gun in hand, walked out of the back door and found Gill in the yard.

Sykes said Gill expressed that he didn’t want to die, so he stopped, put his hands up, then laid on the ground. Gill stayed in that position, with Sykes aiming his gun at him, until police arrived.

Gill was arrested and charged with burglary and possession of drug paraphernalia, after officers discovered he had a crack pipe.

In the end, Sykes said he’s glad nobody – including Gill – was hurt, but admitted that had the scenario been different, the outcome likely would have been different as well.