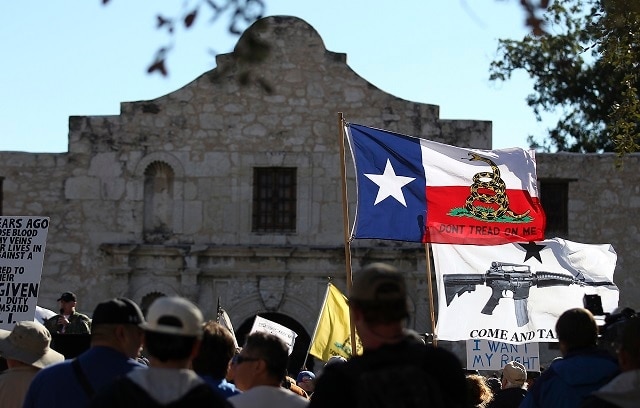 Legislation that will allow the carry of modern handguns openly in the state for the first time since the Civil War-era is just a signature away from reality in Texas. (Photo: AP/San Antonio Express-News, Kin Man Hui, File)

Texas is about to become the 45th – and most populous – state in the nation to allow some form of handgun open carry after the legislature shot off a proposal Friday to the ready pen of Gov. Greg Abbott.

The House measure, which has shuffled back and forth between that body and the state Senate in the past two months, was under threat of a Democratic filibuster this weekend which, with the current session set to end Monday, could have killed it for good.

However, after dropping language disliked by metro police chiefs in the state that would have limited the ability for law enforcement officers to stop lawful open carriers, GOP lawmakers rallied Friday and quickly passed the measure by 102-43 in the House and a 20-11 vote in the Senate, sending it to the promised signature of the governor.

Bill sponsors contend the measure, which they paint as a compromise, finally brings Texas into the club already occupied by most of the country in allowing the open carry of modern handguns.

“We think Texas as being a gun happy state,” said House sponsor Larry Phillips, R-Sherman, “but we denied citizens the right that most other states afforded them. And so this was the time to do it.”

The now-successful proposal, HB 910, would modify language that has been a part of Texas law since 1871 and allow the open carry of modern pistols or revolvers in public, provided the individual is one of the 840,000 Texans with a state-issued concealed handgun license. Currently, only black powder handguns and long arms may be lawfully carried.

Those visiting Texas from other states, provided they have a recognized handgun license from one of 41 states that have a reciprocity agreement, would likewise be able to open carry.

The bill, fought every step of the way by gun control organizations, metro police chiefs and others, was perhaps the tamest introduced this session which included proposals for permitless open carry as well as constitutional carry. However, those more sweeping measures soon fell by the wayside despite the best efforts of gun rights groups who sometimes achieved counter-productive results.

In the end, it was the gun control advocates who were left empty-handed Friday.

Second Amendment groups who supported the campaign, to include the National Rifle Association and a host of state open carry organizations, in turn welcomed the news of HB 910’s final passage out of the legislature, despite its limited scope.

“We’ve endured two years of attacks from gun control advocates and even pro-gun types for our tactics,” Open Carry Texas President CJ Grisham told Guns.com. “We were told our efforts would prevent this day from happening. We were told we were ‘hurting the cause.’ And we proved them all wrong.”

Grisham, who, with others of his 50,000-strong group, has haunted the halls of the Capitol this session, vowed that the fight isn’t over once the current measure becomes the law of the land.

“Our goal over the next two years is simple: prove the naysayers wrong and show that an armed society is a polite society; to prove that cops won’t have trouble telling the difference between a good guy and a bad guy; and to prove that open carry won’t result in people losing their minds in fear,” said Grisham. “And after we accomplish that, we come back during the 85th legislature and we get the rest!”

Other more controversial open carry figures in the region, who this week called for the arrest of public officials in the Lone Star State that voted against the measure, felt that the pending legislation is almost criminally lacking.

“The Second Amendment said shall not be infringed,” Kory Watkins, leader of Open Carry Tarrant County told Guns.com by phone. “HB 910 is treason.”

As for the governor, he reached out very publicly on social media to reiterate his support of the bill Friday evening.

Once Abbott drops his ink, open carry of modern handguns will be legal in Texas for those with permits on Jan. 1.