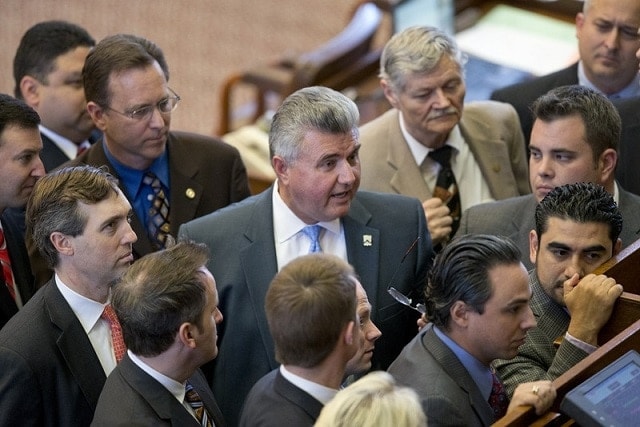 With Monday’s looming end of session, lawmakers in the Texas capitol acted swiftly on a campus carry bill, passing the Senate on Saturday and the House on Sunday.

Now heading to Republican Gov. Gregg Abbott is a proposal introduced into the state Senate by his Lt. Governor, Dan Patrick, in January. Narrowly escaping death by amendment from House Democrats last week in a late night session, the bill made it on party line 20-11 and 98-47 votes in the Senate and House respectively over the weekend.

“This bill will do nothing more than protect the men and women who are carrying concealed on our campuses,” said Rep. Allen Fletcher, R-Tomball, the bill’s House sponsor.

The measure, SB 11, would allow concealed handgun permit holders to carry on public college and university campus grounds to include living areas. However, as part of the weekend compromise, directors of public schools will have the power to establish limited gun-free zones in accordance with their own local polices. Any such zone would require at least a two-thirds majority from the school’s board of regents or similar governing body to overturn, and would have to be reaffirmed every two years. Private schools are not covered by the legislation in its final form.

Concealed carry permit holders found in violation of campus gun-free zones would be liable for a class A misdemeanor offense, punishable for up to one year in jail and a maximum fine of $4,000.

Although gun control advocates that have helped smother campus carry bills in 11 other states this session staunchly opposed the Texas measure, going so far as to purchase airtime against it, they counted Sunday’s passage of a largely neutered down bill as a win.

“We are pleased that the final version of SB 11 contains provisions granting universities broad discretion to keep their communities safe by deciding where and when it is appropriate to allow guns on campus,” said Sandy Chasse with Moms Demand Action in a statement emailed to Guns.com.

“As of today, the gun lobby is no longer the sole dictator of gun policy in Texas. We thank the lawmakers this session who finally woke up to the fact that those who seek commonsense gun policies will not back down in the face of uncivil and unsafe laws,” Chasse said.

Others, to include the Campaign to Keep Guns Off Campus, did not see the bill as a win of any sort, calling it “disheartening,” and saying, “[W]e are not surprised in the least that the majority of the members in the legislature put the interests of the gun lobby ahead of the interests of higher education and students.”

According to the National Conference of State Legislatures, seven states mandate to allow the carry of legally concealed handguns on public post-secondary campuses while another 23 give the ultimate decision whether or not to ban carry to the institutions themselves.

The legislation now will end up on the desk of newly-elected Gov. Abbott, who has been outspoken in supporting gun rights reforms in the state.

The measure, should Abbott sign it into law, would become effective Aug. 30, 2016.