Everytown elephant in the room at journalism workshop 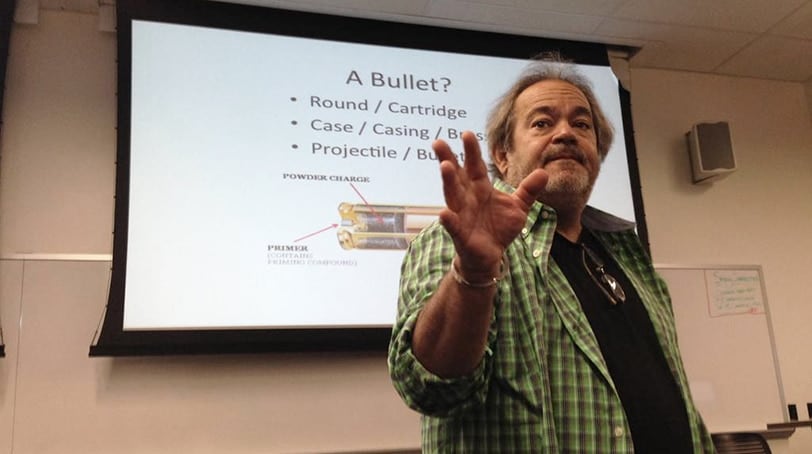 What’s been billed by conservatives in news organizations and gun-focused blogs as a one-sided workshop in covering gun violence turned out to be an informative two-day session offering new perspectives to journalists covering the gun and crime beat.

One could infer merely by looking at the lineup (and many have) that the workshop – funded by gun control group Everytown for Gun Safety – was a biased, anti-gun sham aimed at winning over journalists to help shape the gun debate in that side’s favor. While it didn’t appear that was the intent of the two days of training, there was little of what one might call pro-gun sentiment. While none of the speakers suggested an outright ban on guns, mention of sensible background checks and gun registries was made as a compromise in the fight against gun violence and a means to tracing crime guns to criminals.

“If you want to own a weapon, I think you have to compromise on the regulations that should be required for you to own that weapon,” said Tuscon Police Chief Roberto Villaseñor.

But that’s not what the workshop was supposed to be about – the typical pro-gun, anti-gun debate – said the Dart Center’s executive director, Bruce Shapiro.

“I made a deliberate decision not to include official lobbyists from any side of the gun debate – No NRA, no Everytown, no issue lobbyists,” Shapiro told Guns.com. “Reporters have had many opportunities to hear those familiar voices and familiar debates. We wanted to focus on diverse evidence-based expert perspectives on the one hand, and journalist-to-journalist conversation on the other.”

Two representatives from Everytown – Research Director Ted Alcorn and Editorial Manager Andrei Berman – were present and sat silently in the back of the room as observers. Jennifer Mascia, a writer and editor for Everytown’s “Forthcoming online news magazine on gun violence,” as her workshop bio read, was scheduled to attend as a participant, but couldn’t make it, she told Guns.com

Mascia was fairly tight-lipped on the phone, as would any junior editor only weeks before publication launch. She also probably didn’t expect a phone call from a website that already covers guns and the gun industry. Mascia referred Guns.com to her editorial director, James Burnett, who we were unable to reach by article publication.

Everytown declined to comment in an email request from Guns.com and referred us to the Dart Center on the funding question. Shapiro said the idea for the workshop originated with the Dart Center, not Everytown.

Popular speculation among our readership aside, we were curious as to why the gun control group would fund a journalism workshop. Alcorn and Berman would not comment, but an Everytown spokesperson told Guns.com it was for informational purposes.

“We sponsored and sent a couple of staff to observe (nothing more than that) the workshop because of our interest in improving reporting on all aspects of gun violence in America,” spokeswoman Erika Soto Lamb told Guns.com.

The Dart Center often invites program funders to observe the workshops and this one was no different, Shapiro said.

“So this was consistent with our usual practice. And I certainly think that the independent, critical pitch of some of the speakers would banish any thought that Everytown dictated the agenda,” Shapiro said.

The workshop included a light sparring between law experts David Kopel, researcher and gun rights advocate, and law school professor Lawrence Rosenthal, who both agreed to disagree on several issues regarding guns.

In the interest of article brevity, we will revisit this debate and the other panel speaker presentations in a future post.

Journalist and recently-retired journalism professor Marc Cooper gave a “Guns 101” lecture, which offered the basic principles and mechanics of guns and shooting.

He was returning home to Los Angeles after taking a road trip and said he wondered how the journalists in the room would report what they saw when looking in his trunk. Cooper listed several different gun types and said he was also carrying about 5,000 rounds of ammunition.

Conservative political commentator and writer S.E. Cupp, who could have added more balance to the pro-gun side, was also slotted to speak at the workshop, but canceled because of a family emergency.

Shapiro said he reached out to Cupp after reading a negative column she wrote about the workshop. After accepting the invitation to speak, Cupp updated her article with their conversation:

I accepted and we thought it might be helpful if I discussed with reporters some of the common traps journalists fall into when covering guns —  traps that people like me would readily pounce on.

On a personal note, it was refreshing to engage in a constructive and polite dialogue on a topic that often tends to Inflame. I appreciate that Shapiro reached out and that we were able to hash out our points pleasantly. I’ll look forward to attending the workshop and am hopeful that it will help engender better coverage of this complex and emotional issue. News consumers deserve that.

Shapiro said Everytown’s grant totaled $48,665, but that catering and other expenses had not yet been calculated. He estimated workshop expenses stayed within budget and said anything spent over that would be covered by the Dart Center’s general fund.

All grants to the center and the school’s journalism program have to be reviewed and approved by the university’s sponsored programs administration to ensure compliance with university-wide standards, Shapiro said.

“The Dart Center alone selected the expert speakers and program participants,” Shapiro said. “The program was designed based on a model we’ve used successfully for other trauma-related workshops – on covering … suicide, youth violence and other issues – using the same standards for selecting diverse expert speakers with a strong track record of evidence-based analysis, and journalist participants.”

Students and working journalists from newspapers, wire services, radio stations and TV stations across the country were in attendance.