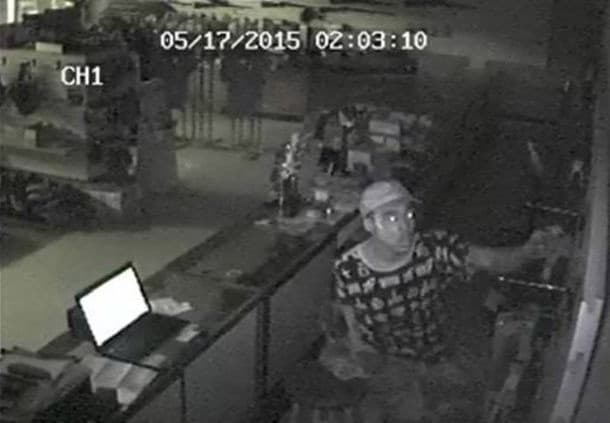 Taken from the surveillance video of inside the store on May 17. (Photo: Pleasant Grove Police)

Authorities are offering reward for information that leads to the arrest and conviction of those responsible for burglarizing a gun store in Pleasant Grove, Alabama.

The Bureau of Alcohol, Tobacco, Firearms and Explosives is offering a $1,500 reward that will be matched by the National Shooting Sports Foundation.

The burglary happened at the Pleasant Grove Gun Supply in the early morning hours of May 17. The suspects busted through the windows with a sledgehammer and scooped up an unspecified number of guns.

“They were probably in and out in 40 seconds,” Pleasant Grove police Lt. Danny Reid told the Alabama Media Group.

Reportedly, it was the third break-in at the store in less than two years. The last break-in occurred Dec. 4, 2013, and before that on Sept. 24, 2013. However, the burglaries are not believed to be related. Suspects culpable for the September incident were later caught, convicted and then sentenced to federal prison in 2014.

This reward is part of a larger national cooperative initiative between the NSSF and ATF in which NSSF matches ATF reward in cases involving the theft of firearms from federally licensed firearms retailers.