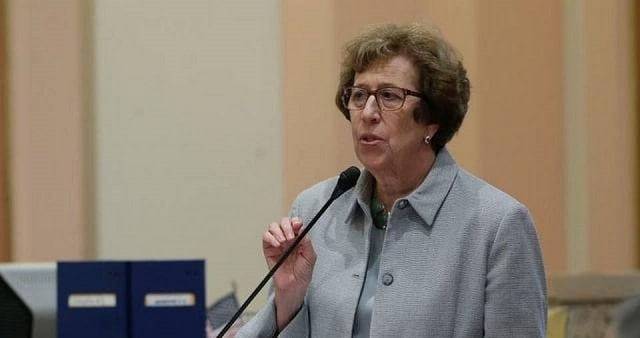 State Sen. Lois Wolk, D-Davis, is backing legislation that would eliminate the option for CCW holders in California to carry on school grounds. (Photo: Sacbee)

A bill that will end the current exception for lawful concealed carry on California campuses rapidly gained steam and passed a bipartisan Senate committee with unanimous vote last week then took the floor in a 23-12 vote Monday.

The measure, which would remove the long held ability of licensed concealed carry permit holders to carry on K-12 and university campuses in the state, passed the Senate’s Appropriations Committee by a 7-0 vote May 28 then met with more of a GOP response in a floor vote Monday.

“Under existing law, county sheriffs issue CCW permits and thereby determine who may carry a concealed, loaded gun on school grounds or campuses,” reads testimony by the Brady Campaign in support of the proposal. “This creates the opportunity for a 21 year old (sic) from a rural county to obtain a CCW permit and carry a loaded, hidden handgun in a dormitory on an urban campus.”

The fix, proposed by Sen. Lois Wolk, D-Davis, is her SB 707, which would drop the current exception in the California Gun Free School Act that allows for those with a permit to carry on campus. The measure would prohibit those with a concealed carry permit from having their firearm with them on any school property in the state to include K-12 campuses, school apartment buildings, common areas, college and university campuses, and parking lots.

It would allow them to approach inside the 1,000 exclusion zone surrounding campuses, but not actually set foot on the grounds with a gun.

Although the bill seems to be experiencing no opposition from lawmakers so far, Second Amendment groups to include Gun Owners of California, the California Rifle and Pistol Association, the National Rifle Association and the Firearms Policy Coalition, the latter terming the legislation, “perhaps the worst gun control bill currently alive in the California Legislature.”

Brandon Combs, FPC president, told Guns.com the lack of backbone in GOP lawmakers against the measure is shocking.

“These so-called Republicans just voted against our Second and Fourteenth Amendment rights. It’s an outrage. I’m furious,” Combs said Friday after the unanimous and bipartisan committee vote. “We’re considering all of our options, up to and including recall campaigns. If our elected officials – especially those who rode into Sacramento claiming to be pro-gun – want to thumb their noses at our civil rights, then they should be thrown out of office.”

The two Republican members of the Appropriations Committee, state Senators Bates and Nielsen, switched their vote to “nay” on the floor this week after a backlash.

The gun rights advocate contends that if the bill continues on its winning streak without a united front against it, the state’s Democratic Governor would have no inclination to consider it for a veto as he had the occasional anti-gun measure advanced in past sessions.

“If the GOP doesn’t unanimously oppose SB 707, it is hard to imagine that Governor Brown would not sign it when it reaches his desk,” Combs said.

SB 707 now advances to the state Assembly where Democrats enjoy a significant 52-28 margin.