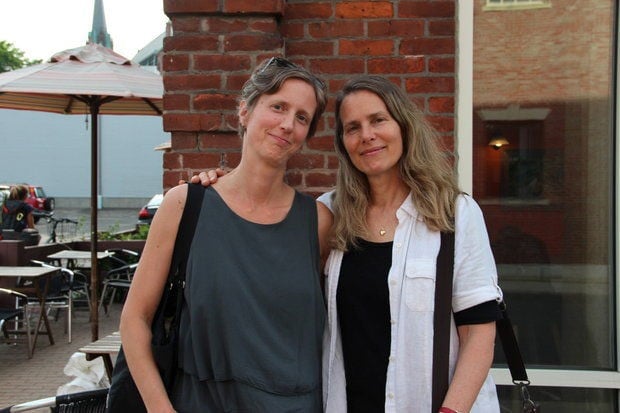 “Like any good idea, it started over a glass of wine at a party,” said photographer Kate Way. (Photo: MassLive)

An Emmy-winning filmmaker and a seasoned educator and photographer have teamed up to produce a documentary on one of America’s most controversial topics: Arming teachers in our schools.

“School safety has become a pressing issue in our communities,” said Julie Akeret, a filmmaker with more than 30 years of experience, whose primary subjects have centered around education. “Children can’t learn and teachers can’t teach if they are scared.”

Akeret believes access to a quality education for every child should be a right, not a privilege.

“When I first read about American schools that were arming their teachers, I knew it was a topic I had to explore,” said Kate Way, who taught high school English for 20 years. “After so many years of experiencing day-to-day life inside of schools, and many years of studying our larger social systems, I felt well positioned to understand the numerous layers of this complicated topic.”

In schools across the country, there are teachers, administrators, even custodians, who have stepped up and said they are willing to put their own lives on the line and protect their students at any cost necessary. And for many schools, this means putting those volunteers through intense training, preparing those educators to essentially be first responders and stocking the schools with weapons to be used in the event of an active shooter scenario or other immediate threat to the children.

“I never had a class like that in college. They never told us, ‘Hey, you know, probably within the next 10 or 15 years, there’s going to be a handful of you that are going to strap on bulletproof vests and run toward gunfire.’” said Wade New, a social studies teacher in Sydney, Ohio. “That’s the direction our society has gone. We got to have people who are willing to do that.”

Akeret and Way told MassLive the idea is a robust movement that’s spreading like wildfire and in their film “Good Guy With a Gun: The Arming of Teachers in America,” they take a look at some of these schools and their disputed decision to have guns on campus as a safety measure.

Way, who is a photographer, said she originally had the idea to do a documentary using a series of still photos, but after discussing the idea with Akeret, they both knew a film needed to be born.

The team, who is funding the project through a Kickstarter campaign that ends Friday, has talked to educators, administrators and local law enforcement in Sydney, Ohio, and is scheduled to return this month for additional interviews. They will also have the opportunity to attend a gun training session for teachers with the Buckeye Firearms Association.

Akeret and Way said they were initially met with some skepticism over the film, and that the idea of two women from Massachusetts traveling to Ohio to make a documentary about guns could be summed up as predictable, cheap and boring. But despite the backlash, which they admit came mostly from their own friends who questioned why they weren’t taking a greater stand against guns, the team pressed forward. Despite them coming from the bluest city in the bluest state, they said they were welcomed in Ohio once those they were interviewing realized they were there out of genuine curiosity, and not just there to degrade their decisions.

Akeret added that it’s been fairly easy to find people who completely support the idea of armed teachers and others who adamantly oppose it, but finding those who are in between – which is what they find especially interesting – is a bit more difficult.

All in all, the goal of the film, which should be completed and ready for distribution by September 2016, is to create a meaningful dialogue about the true goal – protection of our school children.

“That so rarely happens in our culture … particularly around gun debates,” Way said. “I think it’s so easy for all of us to demonize people who have different political views from us, myself included.”