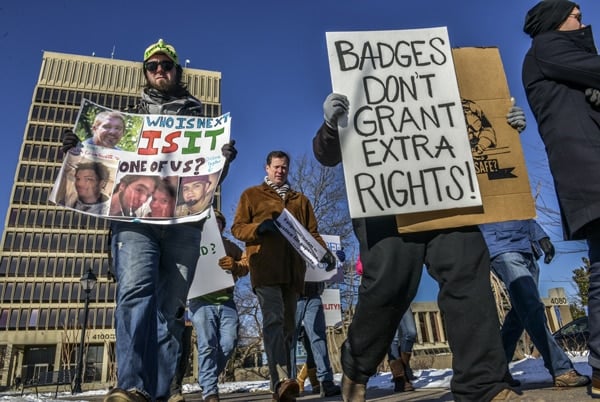 A group of protesters picket outside of a police department in Fairfax following the shooting death of John Geer, who was killed while police were responding to a domestic call. (Photo: The Washington Post)

Police brutality and officer involved shootings are currently a hot button topic bound to stir strong emotions from all sides of the debate, but an investigation by The Washington Post, which is part of an ongoing study of police accountability across the country, revealed that – among other details – of the approximately 400 fatal police shootings this year, the overwhelming majority were determined to be in self-defense and the number of white victims outweighed the rate of black victims nearly two to one.

According to data by the Gun Violence Archive, an online database which keeps up-to-date statistics on shootings, including intentional, accidental, suicides and defensive gun uses, the number of gun deaths across the country this year, through June 1, hovered at 5,099. For investigative purposes, the rate excluded suicides, except as part of a murder-suicide or suicide by cop. Of those, 385 were determined to be police shootings, accounting for 8 percent of gun deaths. In other words, about one in 13 gun-related deaths happen at the hands of law enforcement.

However, the bulk of officer-involved fatal shootings – about 87 percent – were determined to have likely been acts of self-defense. All but 49 of the victims were armed with a weapon, or what was perceived to be a weapon, and six of the cases did not provide details on whether a weapon was involved. The study did not indicate how many cases involved instances of the body being used as a weapon.

About 57 percent of individuals fatally shot by the police were in possession of a firearm at the time, another 13 cases involved a perceived threat with what was later determined to be a toy gun.

In 18 percent of the altercations, the suspect was armed with a knife or other type of blade, about 6 percent of cases involved a vehicle being used as a weapon, and six cases – or about 2 percent – the deadly instrument was some other sort of common item not typically used as a weapon, such as a shovel, hammer, screwdriver or nail gun.

Of the 365 people who were killed by police officers, only 20 were women. Those women were about three times as likely to be armed with a knife or other blade rather than a gun. Some 171 white males have been killed this year, followed by 100 black males, 54 were Hispanic and three were of Asian descent. Race could not be determined in 31 cases and three individuals were another, unspecified race. Men between the ages of 25 to 34 made up the greatest number of deaths.

In about half of the cases, police were responding to a domestic disturbance or other social issue, the remaining half involved standard law enforcement duties, such as responding to crimes like robberies and serving warrants.

Almost a quarter of the individuals fatally shot by police were said to be mentally ill. 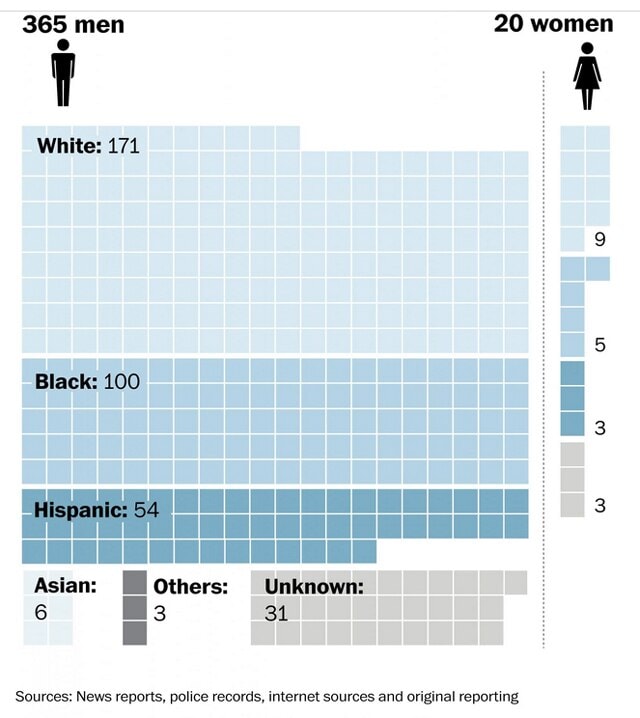 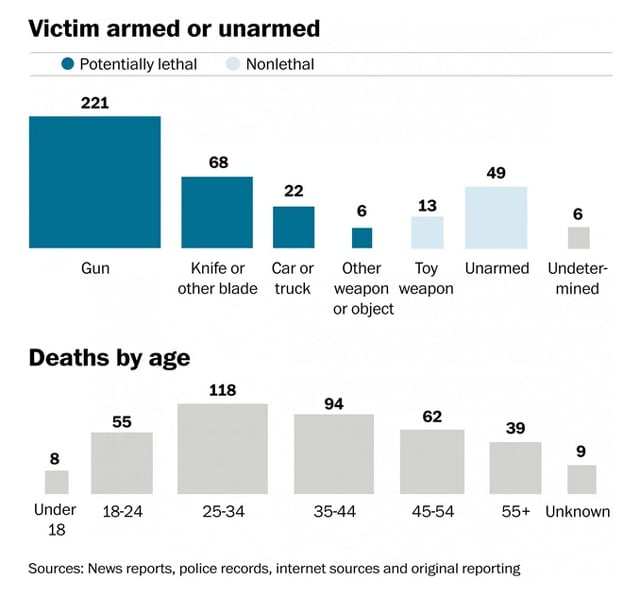