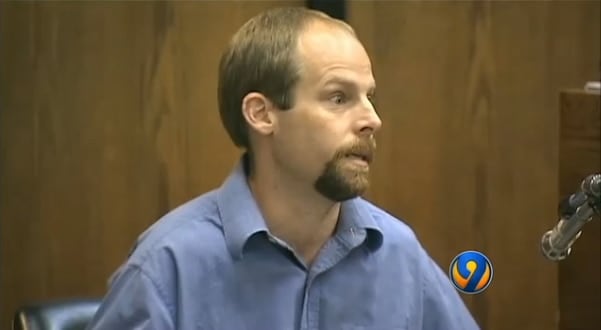 Scott Gragg was fatally shot by Terry Lingerfelt (pictured) during a confrontation in 2010, in which Lingerfelt claimed he acted in self-defense. (Photo: WSOC TV)

A man was fatally shot Monday night after he showed up at a woman’s house in Burke County, North Carolina, acting erratically and threatening those inside. Ironically, the man who was shot, in what appears to be a case of self-defense, was determined by the courts in 2013 to have acted in self-defense when he shot and killed a man three years prior.

The investigation is still underway, but according to reports from local media, Terry Lingerfelt went to the home of Connie Hartzog uninvited and began doing donuts in her yard and accusing her of calling the police on him. Lingerfelt, who was armed with a knife, threatened to “gut” the woman, and that’s when her adult son, Teddy Ray Aldridge, stepped in and demanded he leave.

But Hartzog said that only escalated the situation, and Lingerfelt said he would return the following day “with some bullets, with some lead” for them.

According to an account given by Aldridge, Lingerfelt was heavily intoxicated and chased an unidentified woman and 14-year-old girl around the yard with the knife before finally leaving.

Several hours later, Lingerfelt made good on his threat and returned to Hartzog’s home, armed this time with two guns. Following another confrontation, he shot Aldridge in the hand with a shotgun, but Aldridge returned fire, fatally striking Lingerfelt.

Aldridge was transported to the hospital to receive treatment for the wounds he sustained during the altercation and is expected to be okay.

Hartzog was upset over the way the incident unfolded. Visibly distraught, she told reporters she hated that somebody had to die, but that it was a bad situation.

But Lingerfelt was well-known to local law enforcement. In 2010, an altercation between he and a nearby neighbor, Scott Gragg, turned deadly. Lingerfelt claimed he fired in self-defense and although he was charged with murder, was found not guilty in 2013.

Lingerfelt described Gragg as a bully and a methamphetamine user with erratic behavior. Lingerfelt said he shot the man after he threatened Lingerfelt and appeared to be reaching for a gun, although no weapon was found on Gragg.

Lingerfelt was pleased with the court’s decision and called it “fair and just,” but admitted that his actions were something he would have to live with for the rest of his life.

The investigation surrounding Monday night’s shooting is still underway, and Aldridge does not face charges for Lingerfelt’s death at this time. However, he was arrested following the incident for unrelated charges which included possession of a firearm by a felon and assault by strangulation.

Lingerfelt, who had prior drug convictions, was also a convicted felon, unlawfully in possession of a firearm.