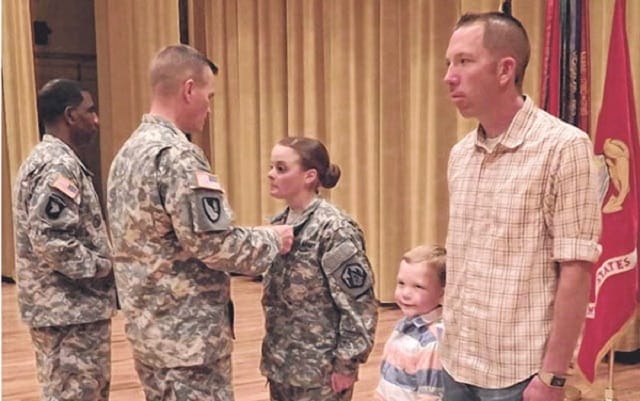 Sgt. Lori Singer-Bare receives the Soldiers Medal from Brig. Gen. Kent Savre for her role in stopping a shooter at Ft. Hood in 2014. (Photo: Marti Yoshida/MyGuidon)

Sgt. Lori Singer-Bare received the Soldier’s Medal last week for her part in ending the April 2014 active shooter event at Fort Hood that took the lives of three and injured 16.

Singer-Bare, stationed at Fort Hood in a military police unit at the time, engaged the shooter, Spc. Ivan Lopez-Lopez, as the soldier moved from building to building across the base with a Smith & Wesson .45-caliber handgun, shooting people at random after being denied leave. Her actions are believed to have stopped the shooting as Lopez-Lopez took his own life shortly after encountering the lone MP.

“I started questioning two Soldiers in the area and was prepping to get them to a safer location, and saw someone out of the corner of my eye,” said Singer-Bare as reported by MyGuidon, the authorized newspaper for Fort Leonard Wood where Singer-Bare is currently stationed. “So, I confronted him by saying ‘Hey, Soldier, you can’t go in there. We have a situation going on.’”

He lifted his Army Combat Uniform jacket to show that he had a weapon and identified that he was the shooter, she said.

“I got my weapon ready to go and then we engaged,” she said.

For her actions, she received the Soldier’s Medal, which ranks above the Bronze Star, on May 27.

As noted by military regulations:

The Soldier’s Medal (SM) is awarded to any person of the Armed Forces who, while serving in any capacity with the Army, distinguished themselves by heroism not involving actual conflict with an enemy. The performance must have involved personal hazard or danger and the voluntary risk of life under conditions not involving conflict with an armed enemy.

“This is one of our own — a real hero who is getting a Soldier’s Medal from the Secretary of the Army, which is a very rare medal, especially given her remarkable heroism in this situation,” said Brig. Gen. Kent Savre, Fort Leonard Wood commanding general, who presented the decoration.

According to an official report released in January, the shooter had nothing in his background that would account for him committing such acts of violence. The incident led to calls to repeal gun-free zones on military bases.

As for Singer-Bare, she has hung up her sidearm and taken off her badge for now and is currently a drill instructor attached to Company E, 1-48th Infantry Battalion, 3rd Chemical Brigade and will serve act in that role for the unit’s next cycle of Basic Combat Training Soldiers. 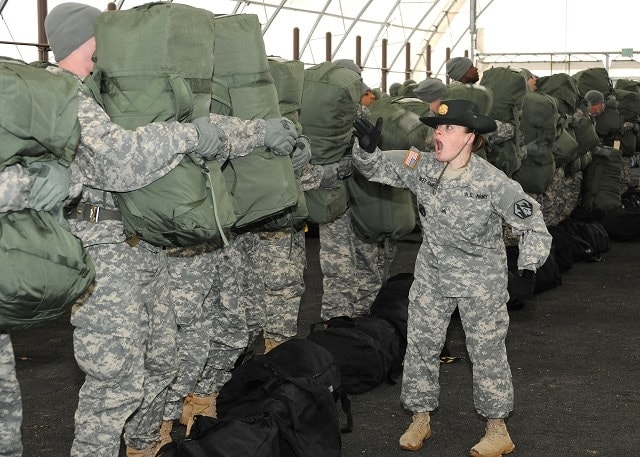