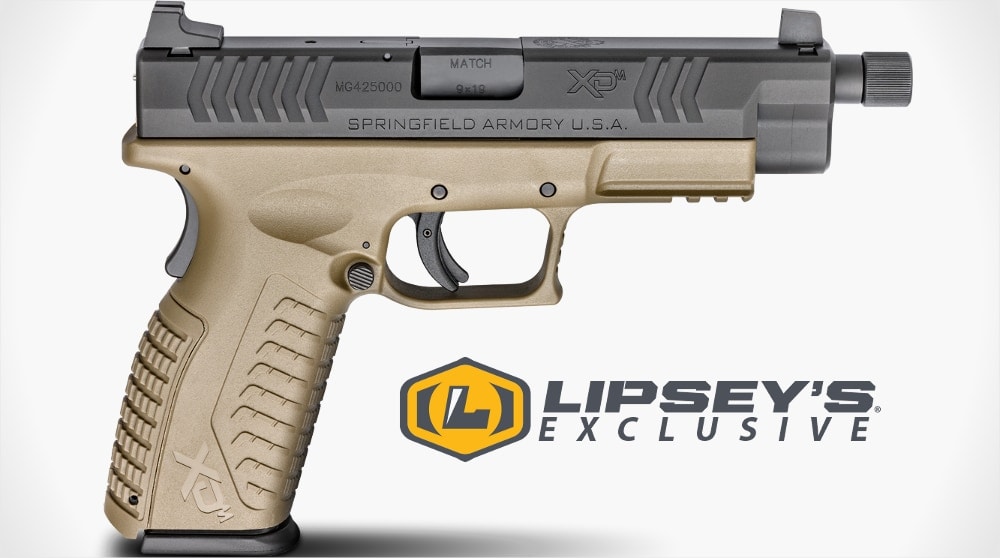 The 9mm model is being offered with a FDE frame. (Photo: Springfield)

Springfield Armory has partnered with national firearms distributor Lipsey’s on a suppressor-ready run of full-size XD-M pistols that are very attractively-priced. They’re based on Springfield’s popular XD-M 4.5 and offered in 9mm Luger and .45 ACP.

They come with extended, threaded barrels and are equipped with a thread protector and raised 3-dot suppressor sights for shooting over concentric cans. The extended barrels measure in at 5.28 inches making this the longest-barreled factory XD-M.

The two models are cosmetically different. The 9mm will be offered with Springfield’s flat dark earth frame for a two-tone look while the .45 uses the standard black frame along with everything else. 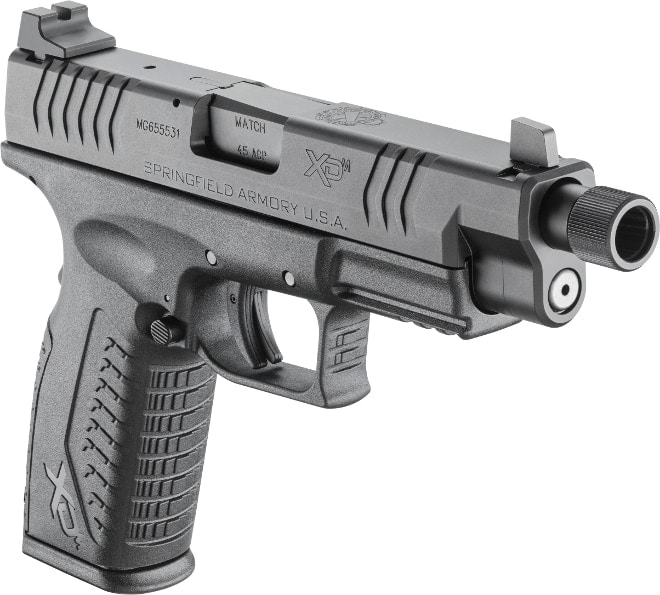 The .45 ACP version is all black. (Photo: Springfield)

Apart from the suppressor-specific parts these these new models are functionally the same as standard XD-M 4.5 pistols that have established themselves firmly in the self-defense, competition and law enforcement markets. While aftermarket barrels and sights have been available for XD-M pistols for years, it’s nice to have a factory option.

The extended, threaded barrel is built to the same standards as the tightly-fit match-grade barrels that come standard with the XD-M series, ensuring that they will be capable of the same accuracy as the original models.

Even with the suppressor-ready parts these guns weigh pretty much the same as the originals at 29 ounces in 9mm and 31 ounces in .45 ACP. And they have the same 19+1 and 13+1 capacities, respectively.

Like all XD-M pistols they are built with tighter tolerances and clearances compared to the base-model XD series. They have a more aggressive grip texture and feature interchangeable backstraps to suit a wide range of shooter grip shapes and sizes. And each pistol ships in a hard case with goodies including three magazines.

With a suggested retail price of $729 in .45 and $699 in 9mm these are very competitively priced at just $20 more than the standard XD-M 4.5 models. In other words, the extended, threaded barrel and suppressor sights are basically free upgrades. Real-world prices will probably be in the low to mid $600 range.

About the only thing that could make them better would be a cutout for mini red dot sights but at these prices that’s really no big deal. If you were thinking about getting a full-size pistol for suppressed use or just like the look of these pistols and have some other muzzle device in mind these are both great packages.