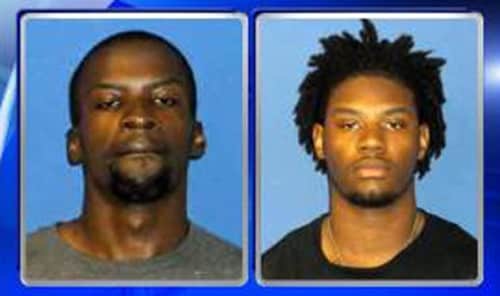 Two suspects are in custody following a violent home invasion thanks, in part, to an 11-year-old girl who bravely hid in a closet and called 911 while her family was being brutally attacked.

Three men broke into the house in Clinton, North Carolina, around 5 p.m. Tuesday, wearing SWAT vests and carrying pistols and stun guns. They demanded money while threatening the family, which included five children from 4 months to 13-years-old.

Yudi Coleman handed over her car keys and all of the cash she had, $120, but that wasn’t good enough.

“They didn’t want that money,” Coleman told WRAL through an interpreter. “So they started beating me, and they dragged me across the room.”

After assaulting Coleman, the suspects then turned their attention to the children and threatened to kill them while they were being assaulted. Stun guns were also used on the children, even the 4-month-old baby.

Eventually, the suspects found the girl hiding in the closet, pointed a gun at her and threatened to kill her as well, but by that time officers were already on their way. Likely knowing this, the three suspects fled from the scene before deputies arrived.

One suspect left in a gray vehicle and is still at large. A second suspect was discovered a few blocks from the home and the third suspect was found in a nearby wooded area with the help of a K-9 unit. Authorities also located the stun guns and pistols, which were determined to be pellet guns.

Four of the victims were treated by paramedics at the scene for injuries they sustained during the home invasion, but all are expected to be OK.

The two suspects, who were later identified as Naquan Lavert Bryant, 20, and Rashad Eugene Curlee, 26, were taken into custody and now face a slew of charges.

“It is despicable that someone would torture children, and for what? A little cash,” said Sampson County Sheriff Jimmy Thornton. “I am thankful that we were able to capture at least two of the three individuals responsible for this heinous act. We will continue to work diligently to identify the third suspect.”

Bryant and Curlee are each being held on a $1 million bond and are charged with six counts of second-degree kidnapping, four counts of assault by pointing a gun, three counts of robbery with a dangerous weapon, two counts each of assault on a child under 12 and simple assault and one count each of first-degree kidnapping, attempted first-degree forcible rape, conspiracy to commit robbery with a dangerous weapon, conspiracy to commit breaking and entering, burglary involving forcible entry, assault with a deadly weapon, impersonation of a law enforcement officer, interfering with emergency communications and resisting officers.