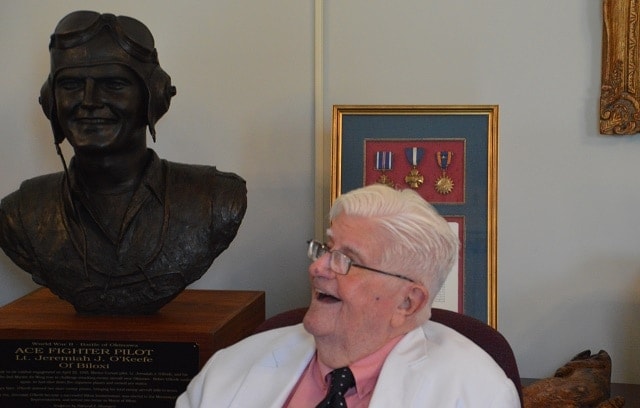 One of the last remaining fighter aces from the “Greatest Generation” received the Congressional Gold Medal at age 91 Friday for his actions over Okinawa in World War II.

As a 21-year-old Marine lieutenant stationed on the recently captured Japanese island of Okinawa, Jeremiah “Jerry” Joseph O’Keefe started Easter Sunday, April 22, 1945, by volunteering to assist the Chaplin with the morning’s service. By the time the sun set that fateful day, the young aviator from Mississippi would come face to face with the enemy for the first time and shoot down five Japanese dive-bombers in a row to earn the title of ace.

Now, just a few weeks past the 70th anniversary of those aerial victories, O’Keefe was recognized with the Congressional Gold Medal at a ceremony in his home town of Ocean Springs. 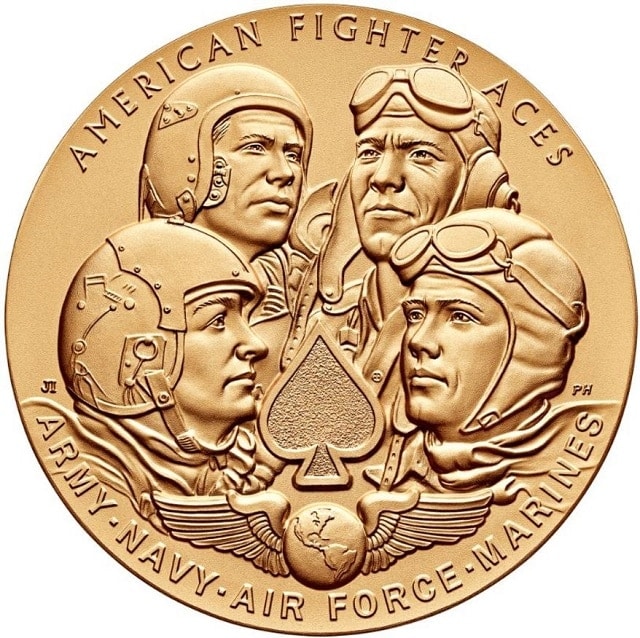 The medal is the highest civilian award given by Congress.

Each Congressional Gold medal is unique to the recipient and the one presented to O’Keefe is reserved only for service members who have achieved the title of ace through the destruction of five or more enemy aircraft in aerial combat. The medal was authorized for all of the nation’s recognized aces collectively last session.

As Congress was in session, O’Keefe was presented with his award by House staffer TJ Moran on behalf of U.S. Rep. Steven Palazzo, R-Miss., while other staffers from the Magnolia State’s congressional delegation looked on.

“In our nation’s history, we have had over 60,000 fighter pilots. Of that number, only 1,447 were recognized as aces. Today, there are only 77 living American fighter aces and one of those brave men stands here among us today,” explained Moran to a hometown crowd of about 100.

Taking a break from college, O’Keefe walked into a U.S. Navy recruiter’s office on the Monday after the attack on Pearl Harbor and enlisted. Within weeks, the 19-year-old was at the controls of a training aircraft in flight school and, while learning his craft at Pensacola Naval Air Station, he elected to go green and earned his wings as a Naval Aviator in 1943 while obtaining his commission in the Marine Corps.

As part of Marine Fighter Squadron VMF-323, the “Death Rattlers,” O’Keefe landed at Kadena air field in early April 1945 and was soon involved in efforts to intercept incoming kamikaze suicide bombers flying down from Japan to attack the U.S. fleet off shore. On that Easter Sunday, a patrol from the squadron, with O’Keefe as a section leader, came across a huge force of an estimated 80 kamikazes heading towards the American ships.

In his first encounter with an enemy plane, O’Keefe raced in at point-blank range in his gull-winged F4U-1D Corsair — often within 100 yards — and one after another quickly shot down four Japanese Aichi D3A1 “Val” dive-bombers. A fifth Val he took head-on and only managed to avoid a collision with at the last moment by pulling up violently, the Japanese plane smoking to the earth below him. When he landed, he was a so-called “Ace in a day.”

Upon examination, only two of his six Browning M2 .50-caliber machine guns still had ammunition remaining.

While the Rattlers broke up that wave of suicide bombers, scratching no less than 23 of the Emperor’s planes in the process, other attacks soon came and later that week O’Keefe chalked up another two victories. By the end of the war in September, he was tied for first place among the squadron’s dozen aces with seven Rising Sun flags stenciled on the side of his Corsair. 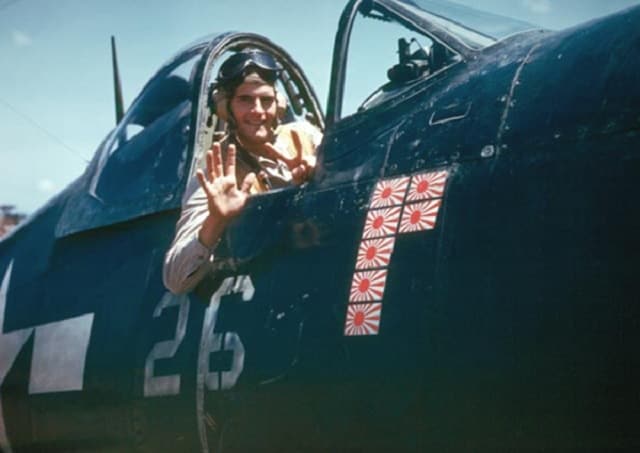 O’Keefe tallied up 7 confirmed aerial victories all in the same week in 1945. (Photo: O’Keefe collection)

“I can say without a doubt that what Mr. O’Keefe, and this elite group of fighter aces accomplished, was not only incredible but had a considerable impact on the United States of America,” Moran told the crowd Friday as he presented the medal to the Marine.

According to AcePilots.com, there were only 118 Marine fighter aces in World War II.

After the war, O’Keefe returned home, finished his degree, and became a successful businessman and politician, serving in both the state House and as Mayor of Biloxi.

It was during his tenure as mayor that O’Keefe stood up to the Ku Klux Klan during the Civil Rights-era which earned him death threats and a burning cross in his yard. Nevertheless, O’Keefe stood his ground then as he had in 1945 and never backed down, which earned him previous recognition from Congress in 2011.

The Congressional Gold Medal will go along with the aviator’s military decorations, which include the nation’s second-highest award for valor, the Navy Cross.

A man of few words but with a great smile, O’Keefe simply told the crowd Friday, “I’m proud and humbled by this recognition…thank you, thank you again.”