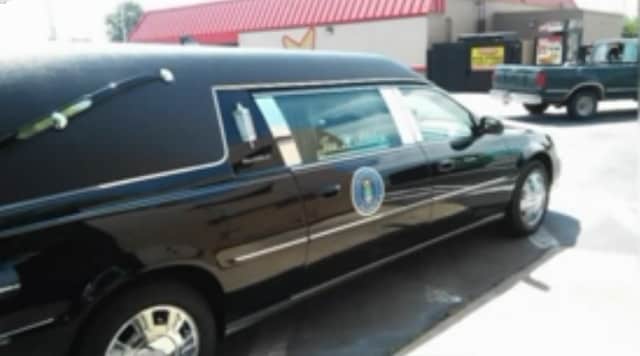 When David Disch went through the drive-thru of a Virginia Beach Hardee’s Saturday morning, he was appalled to see a hearse parked in the back corner of the parking lot carrying the body of 80-year-old deceased veteran, Bobby Hill.

“After I got my food I went around behind it to confirm what I had seen, a flag-draped coffin inside,” says Disch. “You couldn’t miss it.”

Disch said it was bad enough to leave the coffin unattended in the parking lot, but the fact that it was a veteran only made it worse.

“I know we’re all human, we have to eat, but protocols need to be changed, something needs to be changed,” says Disch. “I don’t think it would have bothered me as much, but when they both got out and proceeded in, that’s what set me off.”

Bill Carter, the Ceremony and Planning Team Manger of Bliley’s Funeral Home, confirmed that the funeral home has a policy not to leave bodies unattended in public areas, except in the event of an emergency. But according to a statement from Carter, “In this case at least one associate was watching the locked and secured hearse while they were briefly inside a restaurant.”

Carter also said they informed the family, who was pleased with the company’s services, of the incident.

A similar incident occurred last month at a Dunkin’ Donuts in Lecanto, Florida, and resulted in the termination of the funeral director and driver responsible.