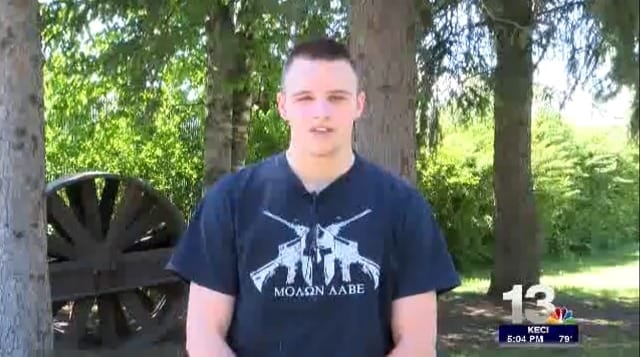 High School junior Chet Billi, though not old enough to vote just yet, has filed paperwork with the state to put an amendment to allow for lawful concealed carry by school faculty on the ballot for the next general election. (Photo: NBC Montana)

A 17-year-old Montana youth is seeking enough signatures to add a ballot referendum asking voters if teachers in the state should be allowed to carry concealed handguns on campus.

Chet Billi, a junior at Whitefish High School, filed paperwork with the Montana Secretary of State last week for the first voter initiative proposed so far for the 2016 ballot. The student decided to take action after legislation to allow teachers to carry on campus tanked in the state Senate. With that in mind, he decided to get involved.

“I’m bothered by the fact that when school shootings happen, the first thing people want to do is take guns away from the people who could stop it,” Billi told KTVQ.

His proposal would be a simple up or down vote on whether teachers, administrators and faculty at schools in Montana should be able to lawfully carry a concealed firearm on school grounds.

While Billi currently cannot vote, state law allows him to submit the proposal to the Secretary of State who are now reviewing it for completeness. If approved to collect signatures, Billi would have to collect some 5 percent of registered voters in each district, a total of 24,175 signatures in all.

“I think it’s admirable that (Billi) submitted the initiative,” Montana Secretary of State Linda McCulloch (D) told NBC Montana. “Now, he can’t sign the initiative until he’s 18. But you can submit an initiative at any age.”

The measure that sparked Billi’s entrance into politics was SB 143, which would have allowed lawful concealed carry on the state’s public colleges and universities. That bill, introduced by Senate Republicans in January passed by a 26-23 vote there but then failed 49-51 in the Montana House in March.

National gun control groups to include Everytown and Moms Demand Action helped drum up opposition for the campus carry measure, framing the proposal as dangerous.

“The difference between this initiative and that bill is mine would allow teachers and faculty at all levels, from elementary school to college to carry,” Billi said.