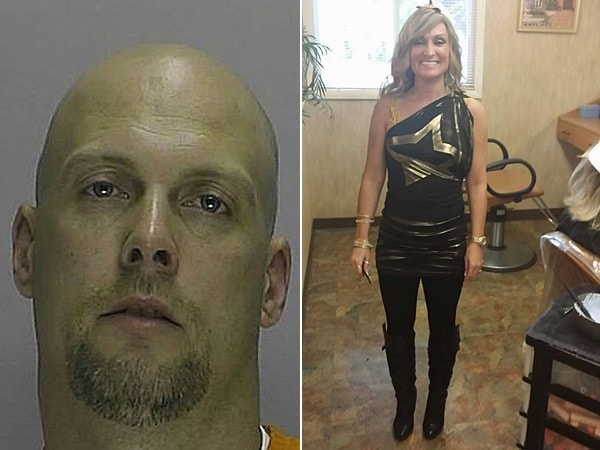 Michael Eitel, 45, is wanted in the stabbing death of Carol Bowne, killed at her home last week while she waited for permission from New Jersey authorities to buy a firearm. (Photos: composite via NJ.com)

New Jersey Senate Republicans have introduced legislation to fast track some firearms permits after an applicant who applied in April was killed in her front yard by her ex boyfriend.

The move to prioritize how the state deals with permit applications was spurred by the death of Carol Bowne, 39, of Berlin, who was killed on June 3. According to Camden Police, Bowne had a protective order on the suspect in her stabbing, Michael Eitel, 45, who at one point was her live-in boyfriend.

Bowne had applied for a permit to obtain a firearm in April, but as noted by the Courier-Post, the review process had not completed although the New Jersey State Police is obligated to provide an approval or denial within 30 days.

“The tragic murder of Carol Bowne shows that there are sensible changes we should make to public safety laws to help people protect themselves,” said State Sen. Dawn Addiego, R-Burlington, in a statement Friday. “This legislation will make sure that those who need protection the most are given priority when it comes to the lengthy process of applying for a firearms permit.”

Addiego’s legislation, co-sponsored by Republican Senators Diane Allen and Jennifer Beck, would allow those currently under a restraining order would see their applications for a state firearms permit prioritized.

According to police, Browne was attacked at her home shortly after 10 p.m. Wednesday and Eitel, who has a long criminal history to include assault and weapons charges, is sought as the primary suspect.

Bowne filed paperwork to obtain a firearms permit on April 21 and checked on the status of that request just two days prior to her death. While waiting for her paperwork to go through, she installed a security system and alerted neighbors and friends.

“The bottom line is if you have access to a firearm, at least you have a fighting chance,” said Scott Bach, the executive director of the Association of New Jersey Rifle and Pistol Clubs.

Bach pointed out that in most states, law-abiding would-be gun owners can simply walk into a gun shop, complete a federal instant background check, and leave with a firearm that day. Not so in New Jersey, a state with some of the strictest gun laws in the country and a history of allowing gun permits to exceed even the mandated 30-day period.

Berlin Township Police Chief Leonard Check, the local agency that Bowne applied for her permit through, advised that typical turn around periods are between two to three months.

Meanwhile, U.S. Marshal Juan Mattos of the District of New Jersey announced the U.S. Marshals Service is offering a $5,000 reward for information leading to the arrest of Eithel who is considered armed and extremely dangerous.