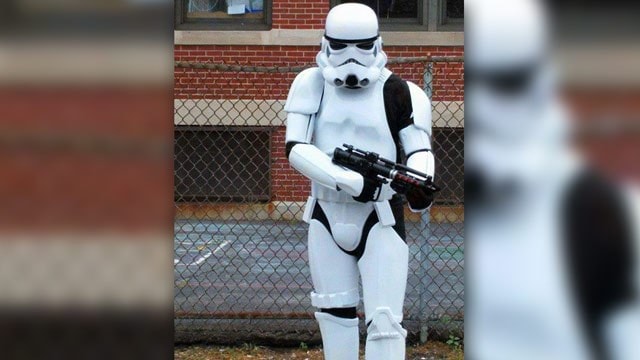 A 40-year-old Lynn, Massachusetts, resident was arrested Wednesday. His crime? Attempting to entertain children at a nearby elementary school while dressed in a Stormtrooper costume.

Apparently George Cross was rather excited about the costume he had purchased for an upcoming comicon, but the feeling wasn’t necessarily mutual throughout the community.

Cross said after putting on the costume, complete with a fake gun, he was walking around the neighborhood showing some friends when he got the bright idea to take the entertainment to a nearby school.

“I honestly opened my screen window, stuck my head out the window, and I was just like, ‘wow,’” said Jami Kelly, a concerned parent.

The principal delayed dismissal until police could arrive on the scene and apprehend Cross, who was arrested and charged with disturbing a school and violation of city ordinance which prohibits loitering within 1,000 feet of a school.

“We just can’t have things like that taking place in front of the school,” explained Lt. Rick Donnelly of the Lynn Police Department.

Cross admits he never meant any harm and was just trying to do something fun for the kids.