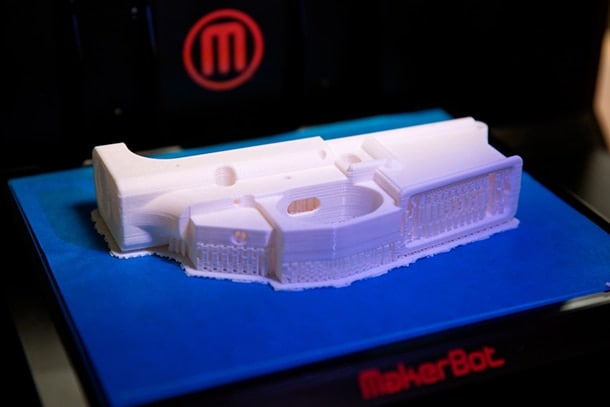 A 3-D printed lower receiver on the print bed of a Makerbot Replicator. (Photo: Josh Valcarcel/WIRED)

The idea of making guns has reached the attention of trendy urbanites.  Apparently overpriced coffee and being assimilated by electronic devices wasn’t enough.  Everything old is new and cool again, so it seems.  I’m referring to a recent article in Wired.com titled, “I Made an Untraceable AR-15 ‘Ghost Gun’ in My Office—And It Was Easy.”  In this, the author, Andy Greenberg, described on his author page as a “senior writer for WIRED, covering security, privacy, information freedom, and hacker culture,” assembles an AR-15 from parts he declares to be untraceable, including an 80% aluminum lower.  He used a Defense Distributed milling machine to fashion a working part.  He labels this a “ghost gun,” a firearm with no serial number, no record of manufacture, and no registration of ownership.

He’s not the first hipster to discover our world.  Joel Stein, author of Man Made: A Stupid Quest for Masculinity, and Kurt Andersen, host of the radio program Studio360, visited a gun range in New York City (New York City!) to experience what they regarded as a stereotypical male activity.  Andersen actually refers to the loading of a Ruger 10/22’s magazine as “old school, analog, and artisanal.”

With that out of the way, let’s consider what’s going on here.  Artisanal?  Well, um, actually, yes.  Firearms have been in the West since at least the Hundred Years War in the early 1400s, and those of us who enjoy black powder muzzle-loaders spend time with technology that has been around for centuries.  Even semiautomatic and full-auto guns have been with us a long time.  Many of us also reload ammunition, and we have a lot in common with people who make their own cheese or who build furniture with traditional (unplugged and unwired) tools.  And as I discussed in my article on the big tent of gun rights, we should welcome in anyone who will stand with us in the defense of rights, even those who sip lattes while doing it.

And the statement that loading a magazine is “analog” is in fact spot on.  There are plenty of reasons to be suspicious of “smart guns,” but chief on my mind, when I consider arming myself with such a device, is battery life and electronic contrariness.  I can use computers and iPhones and Internet-connected coffee makers when I must, but a hand-wound mechanical watch and an all-steel M1911 appeal to my soul.  (Yes, I carry Combat Tupperware.  Compromises, compromises.)  There’s a pleasure to be had in something that I can look inside and know how it works.  I’ve never had that sense about my computer.  Guns don’t ask me if I’m sure I want to fire the round.  (Most of the time, that is.)  And unlike a flashlight or cell phone, I don’t have to wonder if the battery is charged up even in my most modern of guns.

I do have to take issue though with Greenberg’s claim that the AR-15 he made is untraceable.  If he bought any of the parts on-line or if he used a credit card in the purchase, someone somewhere, probably in the depths of the alphabet soup departments in Washington, D.C. can trace what he was doing.  He could have taken steps to reduce the paper trail, but if he bought parts that clearly are made to go into what the anti-gun crowd calls an “assault weapon,” that fact is available to anyone who wants the information enough.

Of course, the manufacture of true “ghost guns” is nothing new.  Time and again, pictures of homemade guns show up on news sites, along with gasps of horror.  But as surprising as it may seem to advocates of gun control, making your own is legal.  If you attempt to sell what you make, you’ll need a license, and presumably if you make a lot, the ATF will wonder if you intend to distribute guns at some point, but in terms of federal law, what Greenberg did was not a crime—check your local laws, state, county, and city if you get any ideas here.

The fact that Greenberg is identified as someone who reports on privacy and hacker culture is important.  If you’ve been paying attention, you know all the threats to our privacy that we face today.  But it’s the hacker connection that stands out for me.  Hackers have a mixed reputation, but fundamentally, the drive is to get inside a machine, take it apart and put it back together, understand how it works and how it might be improved or shifted to some new purpose.  The hacker is the opposite of centralized control.  And this fact must be alarming to people who yearn to regulate gun rights.

Imagine a world in which everyone can make quality firearms in their own homes without seeking permission first and without anyone knowing about the process taking place.  This doesn’t require too much imagination, since that world is very nearly our own.  It’s already the case for anyone with the skills who has access to a machine shop.  Will there be dangers in this new reality?  Indeed, there will, but the essential truth is that it can’t be stopped.  At least I hope it can’t.  Life itself is dangerous, but if history has taught us anything, it’s the lesson that distributed power makes the best societies.  When individuals can speak their minds, run their own businesses, shape the courses of their own lives, and yes, own and carry weapons, their governments have to listen to them, instead of imposing commands from on high.

So sip your latte, pour on some more coal in your iPod, and come on in to the culture of guns.