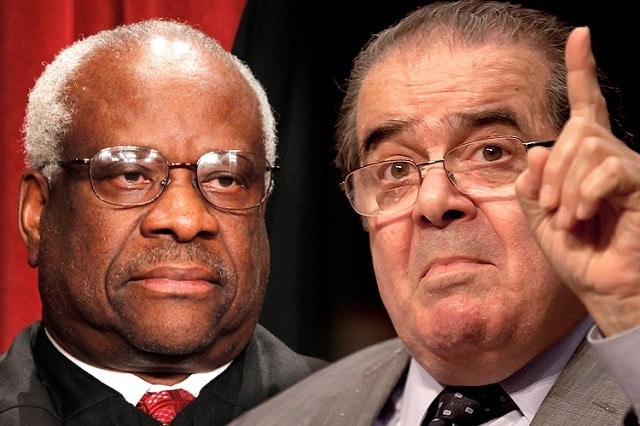 “There is consequently no question that San Francisco’s law burdens the core of the Second Amendment right,” wrote Justice Clarence Thomas in a dissent joined by Justice Scalia to the Supreme Court’s refusal to hear the Jackson case Monday. (Photo: Composite via Salon)

The nation’s highest court swatted away the chance to let lower courts know it meant what it said in its 2008 Heller decision over gun rights issues by taking the case of Jackson v. City of San Francisco. That case was unanimously rejected by a three-judge panel of the U.S. 9th Circuit Court of Appeals last March who upheld a district court’s ruling that the city’s mandatory gun lock law was valid.

Submitted to the high court in January, Jackson has been distributed for conference by the justices four times since then and has been rescheduled on each occasion.

After its fifth conference Monday just four justices had to agree to accept the case for review and it was denied.

Although the appeals court found in 2014 that the city’s law was, “not a substantial burden on the Second Amendment right itself because it did not prevent an individual from possessing a firearm in the home,” attorneys general in no less than 26 states have filed briefs with the Supreme Court arguing the opposite.

A primary reason for this is that the San Francisco law flies in the face of the Supreme Court’s own 2008 ruling in the Heller case in which Justice Antonin Scalia wrote that such requirements violate the Second Amendment, which provides for a, “lawful firearm in the home operable for the purpose of immediate self-defense.”

The plaintiffs in the case, six San Francisco residents who keep handguns in their homes, argued that it was impossible to carry a firearm while sleeping, for example, and by ordering them to lock their guns up, the city denied them the right of self-defense.

One elderly petitioner who lives alone, Espanola Jackson, 79, explained she would have to, “turn on the light, find glasses, find the key to the lock-box, insert the key in the lock and unlock the box (under the stress of the emergency), and then get [her] gun before being in position to defend [herself].”

Broadside from Thomas and Scalia

In an unusual move in the order list, which is typically delivered without comment, a minority of justices elected to include a six-page dissent along with the denial of cert in the Jackson case.

Two justices, conservative bulwarks Antonin Scalia and Clarence Thomas, sprang to the defense of the merits of the Jackson case, contrasting it with Heller, in which the court had held that gun lock laws such as the one in San Francisco would be unconstitutional.

“Less than a decade ago, we explained that an ordinance requiring firearms in the home to be kept inoperable, without an exception for self-defense, conflicted with the Second Amendment because it ‘ma[de] it impossible for citizens to use [their firearms] for the core lawful purpose of self- defense,'” Thomas wrote in dissent.

“The law thus burdens their right to self-defense at the times they are most vulnerable—when they are sleeping, bathing, changing clothes, or otherwise indisposed. There is consequently no question that San Francisco’s law burdens the core of the Second Amendment right,” Thomas wrote.

“Despite the clarity with which we described the Second Amendment’s core protection for the right of self-defense, lower courts, including the ones here, have failed to protect it. Because Second Amendment rights are no less protected by our Constitution than other rights enumerated in that document, I would have granted this petition,” Thomas wrote.

Finally, Thomas in effect dropped the proverbial microphone and walked away, closing by saying, “The Court’s refusal to review this decision is difficult to account for in light of its repeated willingness to review splitless decisions involving alleged violations of other constitutional rights.”