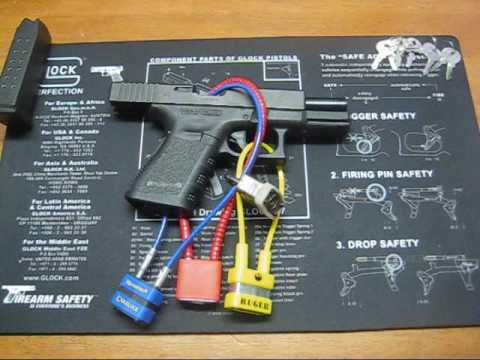 A rash of new mandatory gun lock laws are being proposed and the federal courts are disinclined to hear challenges. (Photo: YouTube)

With a Supreme Court challenge to mandatory gun lock laws rejected, cities and states are moving toward implementing similar requirements to lock or disable firearms not in use.

Proposed this week is a bill in the Delaware House of Representatives and an ordinance in front of the Albany Common Council in New York that would require gun owners to secure their firearms under penalty of law.

“Really, who I hope to address with this are those people who are now going out to go buy guns who are not part of the NRA, who have not gotten the training, but buy guns and forget that this is a really dangerous instrument and they really have to do everything they can to protect it and not just leave it on their table or leave it in their glove compartment,” said Delaware state Rep. Michael Barbieri, D-Newark, of his bill introduced Tuesday to the opposition of the National Rifle Association.

Barbieri’s measure, HB 168, introduced with a half dozen co-sponsors, would change the definition of what unsafe storage of a firearm is under Delaware law. A firearm not stored in a locked container or with a trigger lock, if allowed to fall into the hands of an unauthorized person, would result in a crime punishable by a class B misdemeanor, which carries a punishment of up to 6 months imprisonment and up to $1,150 in fines. The bill ups the punishment if an unsecured firearm is used in a crime.

The Delaware proposal came just a day after the U.S. Supreme Court denied a petition to hear an appeal in a case challenging San Francisco’s controversial 2007 mandatory gun lock law. The case had been winding its way through litigation for six years and, although federal judges at all levels upheld the city and county’s ordinance, not all of them agreed with its constitutionality.

“There is consequently no question that San Francisco’s law burdens the core of the Second Amendment right,” wrote Justice Clarence Thomas in a dissent joined by Justice Scalia to the Supreme Court’s refusal to hear the case Monday.

Albany looks to lock down guns

The same day the Supremes weighed in on San Francisco’s law, the Albany Common Council mulled a proposal that could bring a near-copy of that ordinance to New York’s capital city.

“It goes without saying those accidents are preventable when guns are safely locked up,” said sponsor, 7th Ward Councilwoman Cathy Fahey. “It’s a tough law to disagree with because it saves lives.”

The measure in front of the council, currently under review, would mandate that all firearms, including rifles and shotguns, be secured inside a locking container or box, with penalties for non-compliance ranging to a year in jail.

Other cities in the state, to include gun control role model Buffalo and Rochester, have similar laws already and a bill, A.53, to bring the practice to the entire Empire State is winding through the state Assembly.

Like the Delaware legislation, both the proposed New York Assembly bill and the Albany City Council ordinance are opposed by the NRA and their state affiliates, who decry the measures as being poorly crafted efforts at gun control rather than gun safety.

“We believe that firearms should be stored safely, and there is no one rule that is good for every household,” said Tom King, president of the New York State Rifle and Pistol Association and NRA board member.

The Delaware bill has been referred to the House Judiciary Committee for review as the Albany Common Council’s Public Safety Committee weighs its own proposal.

New York AB.53, however, is expected to stall in the Republican-controlled state Senate.