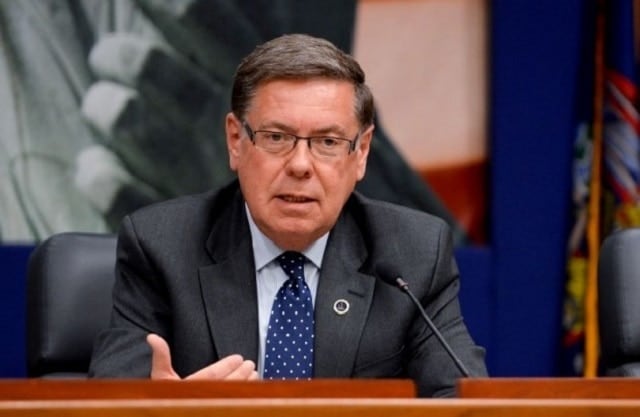 New York State Sen. James Seward, R-Milford, is struggling to push through SAFE Act reforms that may have to contend with such strange bedfellows as New York City’s crime wave and rent control endeavors. (Photo: Facebook)

In a 35-26 vote this week, New York senators approved a measure that would weaken several parts of the state’s draconian gun control law as a crime wave hits New York City.

The Republican-backed measure now headed to the state Assembly would allow for heirloom firearms classified as assault weapons to be inherited rather than turned in, adjust how the state addresses mental illness and gun ownership, and keeps gun owner’s information private among other reforms.

Sponsors of the proposal paint it as an attempt to repeal sections of the 2013 Secure Ammunition and Firearms Enforcement Act – rushed through the legislature in the wake of the Sandy Hook Shooting – that are among the “most onerous” to law abiding citizens.

“These are commonsense changes, administrative changes to the SAFE Act,” State Sen. James Seward, R-Milford, said on the Senate floor.

Seward’s measure, S.5837, is a repealer bill that goes after at least nine different parts of the state’s gun laws. First, it would allow that grandfathered registered firearms and magazines classified as assault weapons by the state be allowed to transfer upon death to inheritors. Under current law, these must be turned over to authorities.

Next, the bill would keep the personal information contained in the gun owner database private and outside the bounds of public records requests without those on the list having to opt-out. This has long been an issue in the state after local media published the addresses of gun owners in an interactive map.

In addition, the measure would institute reforms to the state’s mental hygiene laws, making it mandatory that persons subject to rulings under its tenets be properly informed and allowed to appeal any such adjudication. In recent months, there have been several high-profile cases of Empire State gun owners who have found themselves forced to seek relief in the courts over what they felt was improper seizure of their firearms under the new SAFE Act-enhanced mental health codes.

Finally, the bill would remove the State Police from the certification process for gun and ammunition dealers, instead, sending that task over to the state Division of Criminal Justice Services. In the past, the NYSP has been seen by many gun shop owners as being heavy-handed in their application of regulatory matters.

The proposed reforms come as New York City Mayor Bill de Blasio (D) is catching flak from activists as the murder rate in the state’s largest city is up almost 20 percent this year and crime has risen for the past two years in a row.

“We have the right approach for turning the tide and in that we will get a lot of guns away from the bad guys,” de Blasio said.

While the bill to expand gun rights in the state has managed to make it halfway to Gov. Andrew Cuomo’s desk, its passage through the Democrat-controlled Assembly is expected to be an uphill battle with little likelihood of success, with Assembly Speaker Carl Heastie, D-Bronx, earlier this month deadpanning any SAFE Act repeal as unlikely.

However, a deal could be on the horizon if Assembly GOP members from New York’s more conservative voter base compromise on rent-control legislation that Gotham Dems are treating as a pet-project this session. Assemblyman Pete Lopez, R-Schoharie, is working a deal to tie together the seemingly unrelated topics of apartment rent in New York City with keeping heirloom guns in the family.

“We have a collision of culture between the SAFE Act and rent control,” Lopez said. “and both of these issues deserve serious discussion. My legislation is intended to help inner city lawmakers understand that the SAFE Act is not going to achieve the intended consequences and we shouldn’t be focused on punishing law-abiding citizens.”

Senate Bill 5837 is currently in the Assembly Codes Committee for review.