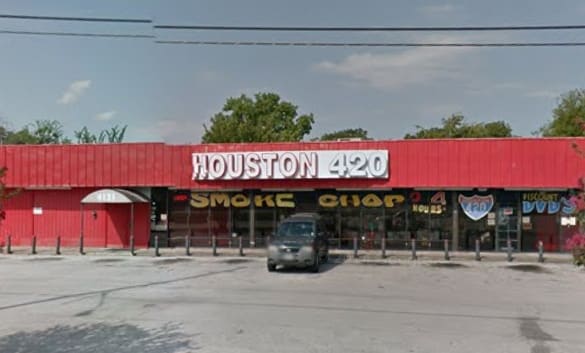 The Houston 420 Smoke Shop has been targeted for robberies at least three times in three months. (Photo: Google Maps)

Attempted robberies just days apart at two different smoke shops in Houston left the clerks at both businesses firing back at the suspects, resulting in the death of one.

An employee at Happy Daze said it was June 1, around 10 p.m. when the incident, which only lasted about 30 seconds, occurred.

“They pulled in. They made a U-turn and they parked right there and he heard them yelling, ‘Go, go, go,'” the store owner, who did not want to be identified, told a local ABC affiliate.

Four suspects got out of an SUV wearing masks and carrying guns, but the clerk, a veteran who served in Afghanistan, was also toting a 9mm. One of the suspects aimed his gun at the clerk, and the clerk subsequently fired three shots, striking the suspect.

The injured suspect attempted to run away, but collapsed outside near the vehicle. The remaining three suspects got into the getaway car and sped away, leaving their injured comrade behind.

“He fell at the end of the car, and then they took off,” the owner told KHOU. “They probably don’t even know what happened to their buddy ’cause they just took off, like ‘see ya later’ type stuff.”

The injured suspect was pronounced dead at the scene, and authorities are hoping that the images captured by the video surveillance system will help to identify the remaining suspects.

The store clerk, as well as a customer who was present during the attempted robbery, were not injured, and the suspects left empty-handed, and no charges have been filed against the clerk.

“We hate to see any of that happen,” said the shop’s owner. “We are just out here trying to make a living and it sucks when somebody comes and tries to take it from you when you are out here working for it.”

But the Happy Daze smoke shop wasn’t the only Houston shop hit in an apparent rash of robberies. Less than a week prior, on May 27, the 420 Smoke Shop was targeted, but again, an armed clerk fought back against the suspect.

Authorities said the male suspect was armed with a gun and entered the shop about 2:15 a.m., but an employee, who was not identified, saw the suspect before he came through the door and armed himself with his own gun, KHOU reported.

An exchange of gunfire ensued before the suspect fled from the scene in an SUV. However, the clerk followed the suspect out of the shop and continued firing at the fleeing vehicle. The clerk told the police he believed he had struck the vehicle. Authorities checked with local hospitals for anyone who showed up with a gunshot wound, but none were reported.

The clerk and other employee present at the time were not injured during the exchange and nothing was stolen.

It’s unknown if the robberies were related.