Save a little this Spring with Beretta and Browning 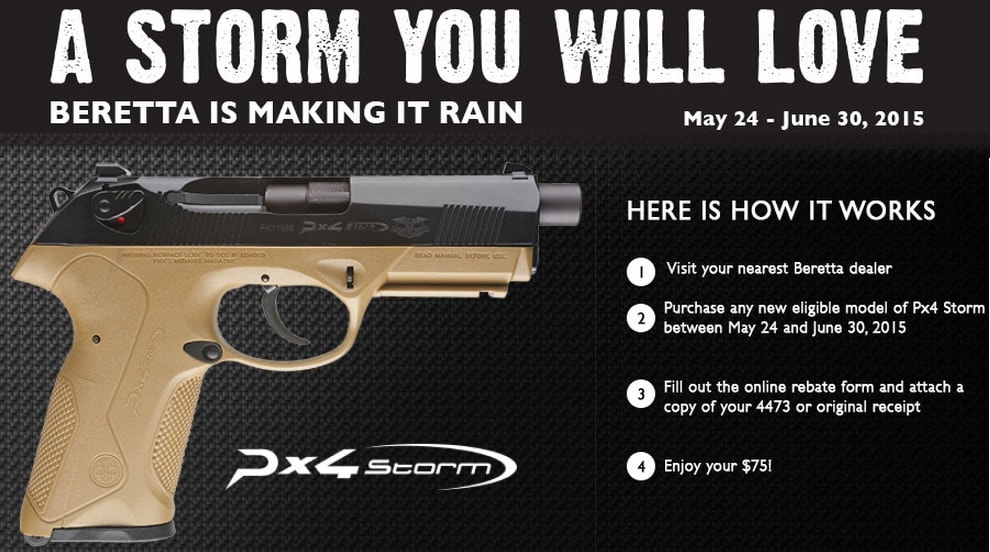 Beretta is offering $75 back on the PX4 Storm series. (Photo: Beretta USA)

Beretta USA and Browning are offering rebates on a nice selection of firearms this Spring with rebates that range from $25 to $100 off popular guns if purchased between now and June 30.

Browning is offering $25 back with every purchase of any of its rimfire handguns, not just on its well-established Buck Marks but also on the fun new 1911-22 series. With .22 Long Rifle availability on the rise it might be time to pick up that plinker you’ve been thinking about.

The Buck Mark series has a lot of options and has a solid footing in the world of full-size .22 handguns. Browning’s 1911-22 series is a little different, based on the 1911 but scaled down to 85 percent.

Browning has been quietly expanding 1911-22 offerings these past couple of years with models that will appeal to just about anyone looking for a fun and lightweight plinker that’s just at home on a long hike or camping as it is at the range. 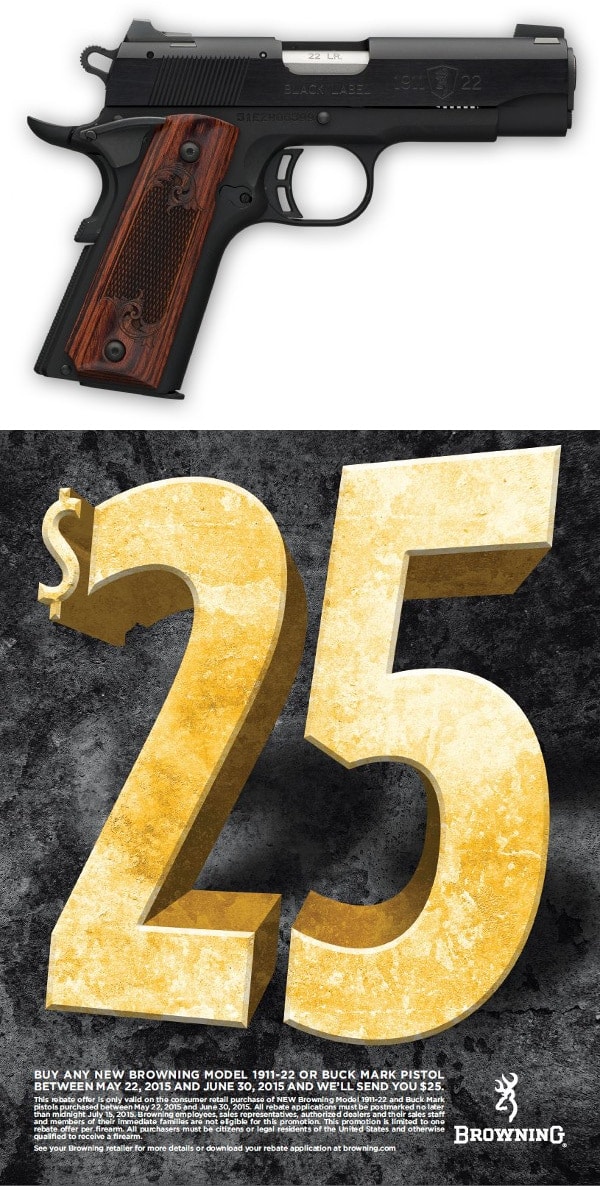 Browning is offering $25 off on their rimfire pistols this month. (Photo: Browning)

Offered with polymer or alloy frames, Browning’s 1911-22 series includes scale versions of full-size and compact 1911s that will fit just about any size hands from the littlest shooters up and make fantastic learner guns for kids and kit guns for adults. They even have models with extended, threaded barrels that are suppressor-ready.

Beretta is offering a little more in return for picking up a PX4 Storm pistol or A300 Outlander shotgun. The PX4 series is Beretta’s lightweight alternative to the famous 90-series alloy-framed handguns and the A300 is one of Beretta’s modern semi-auto series of shotguns.

Also through June 30 Beretta is offering $75 back for every PX4 pistol sold. The PX4 series encompasses a complete line-up of full-size to subcompact handguns in 9mm, .40 S&W and .45 ACP. They are polymer-framed hammer-fired pistols with a variety of trigger and safety or de-cocker options with largely ambidextrous controls and solid capacities.

The compact and full-size PX4 Storm pistols use an uncommon and low-recoil rotating, locking barrel system. The non-tilting recoil operation means less barrel flip and a fast, smooth return to target, even with hot and snappy ammo including .40 S&W. Beretta is offering $75 back on all PX4 models, including pistols with an Inox finish and their full-size tactical .45s.

The offer extends with the A300 shotguns with $100 rebates on all Outlander models. Unlike Beretta’s more expensive semi-autos, the Outlander series A300 Outlander uses a conventional gas piston and bolt design while the A400 family uses Beretta’s newer B-Link gas piston and rotating bolt. This is part of what makes these shotguns affordable without sacrificing features, fit or finish.

The Outlanders have 3-inch chambers to accommodate a wide range of shotshells for just about any purpose, whether its hunting, games or protection. They’re offered with 24- to 30-inch barrels threaded for the Mobile Choke system and start at around $650, including three chokes and an adjustable stock.

PX4 pistols run in the $400 to $500 range, for the most part, and Browning’s rimfire pistols can be found for less than $350 in cases, making all three of these rebates pretty appealing to the springtime shopper.