ATF posts safety advisory on improper use of exploding targets

Released in conjunction with the National Explosives Task Force (NETF), the agency posted the warning, dated May 29, on their social media account this week.

“Exploding targets are not regulated by ATF but can pose serious injuries or death if incorrectly used by a sportsman,” advised the agency, who acknowledged that most shooters who utilize the targets do so responsibly.

“The advisory is designed to inform people using or encountering the targets that, when mixed, they are high explosives and should be treated with caution and in accordance with manufacturer’s instructions.”

Among the recommendations from the agency are to avoid placing exploding targets in, under or next to objects that can produce shrapnel, not following manufacturer guidelines, combining multiple targets, and adding materials to the mixture.

Further, ATF warned that mixed exploding target compounds cannot be transported without a federal explosives license and that, if utilized outside of their intended use, could fall under the, “purview of other federal, state or local laws.”

Manufacturers have long advocated that binary exploding targets are perfectly safe when used in accordance with their instruction.

Further, as many types of these targets produce a water vapor when shot, and are not flame-sensitive or friction sensitive like black powder, federal regulations classify most exploding targets as a “Class 70 Target, n.o.i. (Not otherwise indexed),” making it a same-day-use-at-the-range product.

Nevertheless, lawmakers in Indiana and Louisiana have sought to implement further regulation on binary exploding targets that combine ammonium nitrate and aluminum powder.

This attention has led companies who produce the targets to lawyer up when media outlets refer to their products incorrectly as bombs. 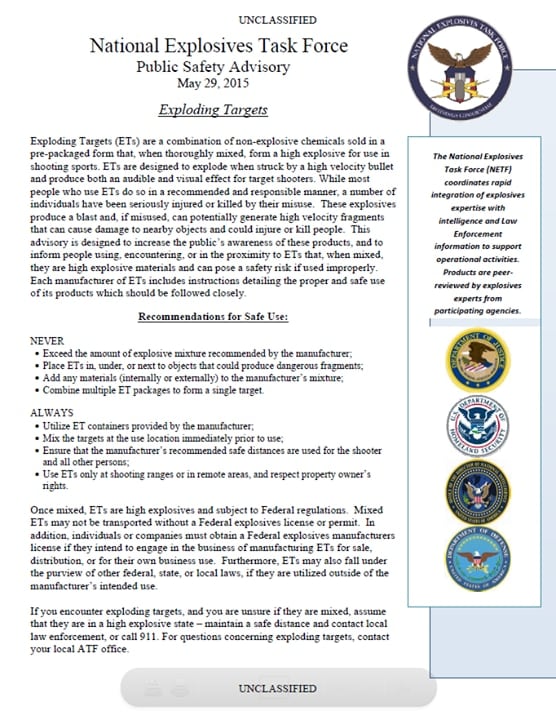