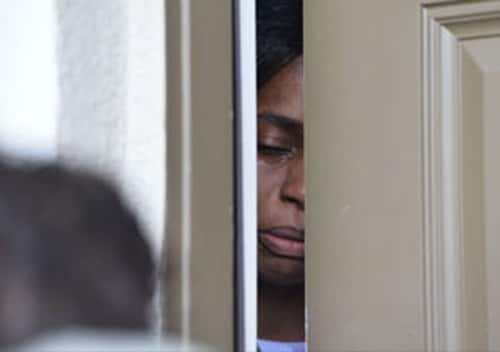 Shalom Toney said she feels like a prisoner in her own home. (Photo: Daily Commercial)

A man is recovering from multiple gunshot wounds after his wife, who said she acted in self-defense, shot him during a domestic dispute in Groveland, Florida, late Monday night.

Around 11:30 p.m., William James Toney, 48, and his wife, Shalom, 42, had an altercation that turned physical. At some point during the fight, Shalom shot her husband five times with a .357 revolver, WESH reported.

William ran to a neighbor’s home, banged on the door, and pleaded with them to call 911 after he told him that his wife had just stabbed him. While the neighbor was on the phone with 911, William returned to his home.

When first responders arrived on the scene, William was airlifted to a local hospital where his injuries were deemed non-life threatening.

According to police, Shalom initially fled from the scene and was detained by officers when she returned several hours later. Shalom said she acted in self-defense when she shot her husband, and after multiple interviews, the officers left the home without the woman in custody. The investigation is still underway and once completed, authorities will determine if Shalom did, in fact, act in self-defense.

Following the incident, Shalom was hesitant to talk with reporters, and only spoke through a slightly opened door. Reporters indicated bruises and burn marks could be seen on the woman, as she gave a small glimpse into what transpired that night.

“He beat me so bad. I’m just so scared right now,” Shalom said. “He attacked me, he jumped on me, he ripped my hair. He was fighting me constantly, and he charged me with the butcher knife twice and it was so scary.”

Police commander Anthony Biasella said officers have visited the home on numerous occasions and “they appear to have a volatile relationship.”

Rose Ambroso lives down the street from the couple and described William as “a sweet guy” who always waves and often plays with his children. But Coleen Carlson, who lives a few doors down, said she hears frequent arguments coming from the couple’s home.

Shalom has no criminal record, but William’s prior charges include aggravated assault, battery, obstructing justice, domestic strangulation and contempt of court.

It’s unknown if charges have been filed against either party at this time, but officers did confiscate Shalom’s gun.

The couple’s children, ages five and nine, were also home at the time of the altercation, but were uninjured. They were placed into protective custody with the Department of Children and Families and are now staying with family members. Authorities said it wasn’t immediately known if they witnessed the shooting.

Shalom has since filed a petition for a restraining order against her husband, claiming ongoing abuse and that she lives in constant fear for her life. In the petition, she alleges that William once beat her so badly it caused her to miscarry their unborn child, and that the children have been abused at the hands of William as well.