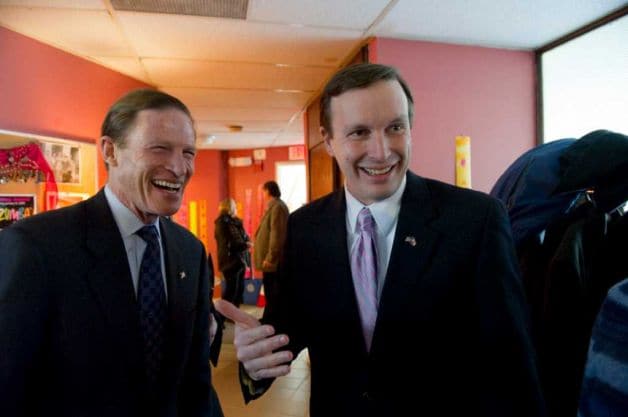 The legislation, backed by Dems in both the House and Senate, would encourage more states to adopt licensing schemes similar to Connecticut’s handgun purchasing law, which requires a special renewable permit to purchase any revolver or pistol.

“All states require licenses to drive a car or hunt or fish – so why not handguns, which can kill?” said Connecticut Democrat Blumenthal in a statement. “Requiring a license to purchase a deadly weapon is at least as important as requiring one to drive a car. This legislation should win broad, bipartisan support.”

Joined by U.S. Reps. Elizabeth Esty of Connecticut and Chris Van Hollen of Maryland, the lawmakers offer up that handguns should be targeted for special licensing due to their role in gun violence.

“Of the thousands of Americans murdered every single year by firearms, nearly 90 percent of those deaths occur with a handgun,” said Esty. “With mothers, fathers, sisters, brothers, and friends dying every day because of guns, there is no question that gun violence is tearing at the fabric of our communities.”

The proposed legislation, termed the Handgun Purchaser Licensing Act of 2015, would authorize the Department of Justice to establish a grant program to help states develop and implement permit-to-purchase requirements for all handguns including those rented, bought or transferred in private sales or at gun shows.

The structure of the programs would be based on Connecticut’s which requires a $70 fee, completion of a training course from an approved instructor that includes live fire and a background check that can take as long as eight weeks.

The bill comes just days after a New Jersey woman was stabbed to death in her front yard by an estranged ex-boyfriend while still on the waiting list for a permit to purchase a firearm that she filed in April.

The bill’s sponsors argued that laws of the proposed type bring results. As such they pointed to a recent study by the Johns Hopkins Center for Gun Policy and Research, a part of the Johns Hopkins Bloomberg School of Public Health, into Connecticut’s handgun purchasing law and its perceived effects on gun homicides in the state.

The study estimates that in the first 10 years of the state’s permit-to-purchase requirement’s enactment, murders by firearms were reduced by some 40 percent.

“Permit-to-purchase laws, which require prospective handgun purchasers to first obtain a license from the police after passing a comprehensive background check, appear to reduce the availability of handguns to criminals and other people who are not legally permitted to buy guns,” said study author Daniel Webster.

However, other researchers contend that Webster’s claims are cherry picked and that Connecticut’s gun deaths were falling at even faster rates before the permit law came into effect. Moreover, they argue that after the law was adopted, something rather the opposite of Webster’s study findings occurred.

“In three of the four years immediately after the law was passed in 1995, Connecticut’s firearm homicide rate rose relative to the firearm homicides in Northeastern States,” wrote Dr. John Lott of the Crime Prevention Research Center.

Further, Lott notes that, “For overall violent crimes as well as robbery and aggravated assault, Connecticut’s crime rate was falling relative to the rest of the U.S. in the years prior to the licensing law and rising afterwards.”

While just 10 states currently have such schemes in place, they are by no means popular.

In 2007, Missouri repealed a long-standing permit-to-purchase requirement while North Carolina’s Jim Crow-era law has been the subject of bitter contention this legislative session, with Republican lawmakers pushing for its repeal.

In that effort, gun control advocates to include former New York Mayor Michael Bloomberg’s Everytown organization are pushing a study – also by Webster – into Missouri’s repeal, claiming that it coincided with a jump in gun homicides in that state.

“While it is true that the murder rate in Missouri rose 17 percent relative to the rest of the U.S. in the five years after 2007, it had actually increased by 32 percent during the previous five years,” said Lott. “The question is why the Missouri murder rate was increasing relative to the rest of the United States at a slower rate after the change in the law than it did prior to it. Missouri was on an ominous path before the law was ended.”

“They selectively include and exclude data to create statistics that fit with the gun-control argument,’’ said Jennifer Baker, spokeswoman for the National Rifle Association.

“In a perfect world there would be no violence and we’d all be safe. But the fact is, gun control doesn’t make us safe. It creates more victims,” Baker added.

The Handgun Purchaser Licensing Act of 2015 is expected to be introduced to both the House and Senate this week.