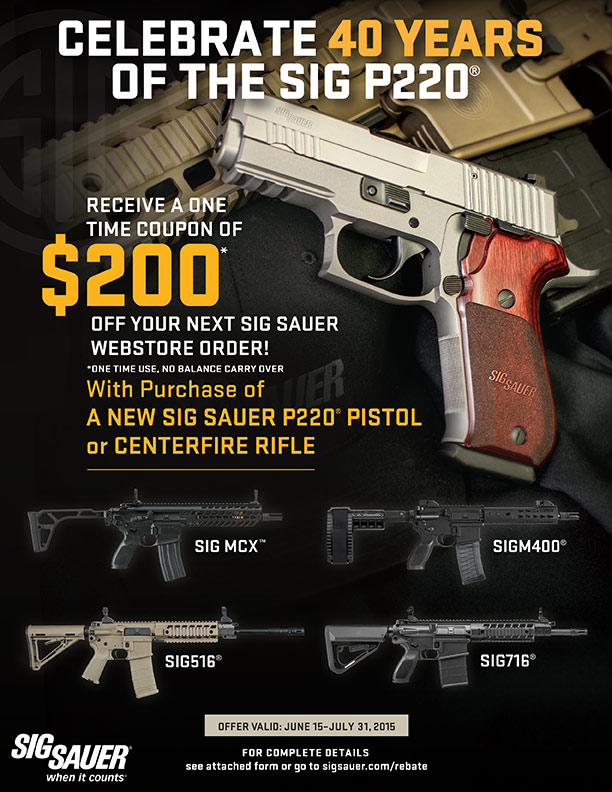 Buy any eligible SIG firearm and get a $200 credit towards purchases at the online SIG Store. (Photo: SIG)

As spring winds up and summer moves in gun manufacturers are making especially easy to get outside and shoot with extra savings and free goodies. SIG Sauer just announced its latest promo and it’s pretty juicy. Buy any classic P220 or centerfire SIG rifle and get a credit worth $200 at the SIG Store.

That’s a lot in free gear and swag. With a $220 store credit you can get a molded leather holster, two extra magazines and still have a little left over to spend on stuff when you buy a new P220, or more than a dozen AR magazines with SIG rifles.

According to the summer rebate page, the promo covers full-size rifles and carbines as well as rifle-pattern PSB-model pistols with SIG braces, including the MCX, M400, 516, 716 and 556xi firearm families.

Coupon balances don’t carry over so be sure to buy as close to $200 worth of gear or more to get the full value of the coupon. The promotion covers all guns purchased between June 15 through July 31. Rebates must be submitted by or before September 1 and coupons expire on Dec. 31. There’s a good window to get the credit but don’t put it off too long or it will expire.

SIG is celebrating the 40th anniversary of the P220 this year, SIG’s groundbreaking service pistol and forbearer of all “Classic” P-series pistols. The P220 is offered in .45 ACP and for a limited time, 10mm, and is one of the most modern single-stack designs on the market.

The slim design lends itself well to concealed-carry as well as home defense, duty and range work, making it a popular gun even as new derivatives hit the market. It’s offered in a number variants with different trigger and frame options including light alloy and stainless steel.

SIG’s offers a complete line of modern rifles like the recently-launched MCX series, a piston-driven rifle system developed from the ground up. The 516- and 716-series rifles are patterned off the AR-15 and AR-10 designs but updated with gas piston systems. The M400 series is SIG’s conventional direct-impingement line of guns.

This promo covers some of SIG’s best and most iconic products. If you were thinking about adding one of these to the collection now is definitely the time to buy.