Heckler & Koch has been steadily expanding its catalog and the company has just announced the VP40, a polymer-framed, striker-fired .40-caliber followup to their highly-regarded and instantly-successful VP9 pistol. “Like the 9 mm VP9, the VP40 has been through just about every test and challenge possible,” said Wayne Weber, HK-USA president.

The VP40 has the same build quality and features the VP9 does, just chambered for the larger cartridge. The VP40 holds two fewer rounds than the VP9 with a 13+1 capacity, which is right in the middle of the pack for a .40-caliber service pistol. 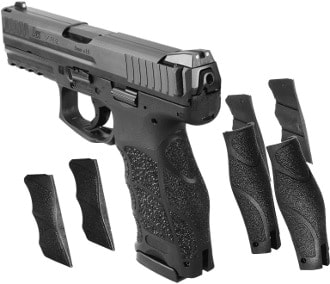 The highly-configurable grip of the VP series. (Photo: H&K)

Despite being new the VP series is well-known for its excellent ergonomics. Like the 9mm model the VP40 has nine interchangeable grip panels for the perfect grip shape and size, with a long beavertail for a very high and tight grip.

But it’s the trigger that the VP series is best known for. VP triggers have a short, extremely light take-up, and a crisp, repeatable break, like a two-stage trigger on a rifle. The triggers break reliably at between 5 and 5.5 pounds, making them excellent for duty and competition right out of the box.

While the new handgun will no doubt be popular for self defense and practical shooting, chambered for .40 S&W the gun is guaranteed to make a splash within law enforcement communities. If there’s one caliber that’s synonymous with law enforcement, it’s .40 S&W.

Still, a lot of shooters prefer the hotter and harder-hitting cartridge, especially in shooting sports where it score higher. And as people have learned in the past few years, sometimes it can be hard to find the most popular rounds including 9mm.

Everything else, not surprisingly, is very similar to the VP9. It got the same 4.1-inch barrel, light build at 26.5 ounces with the magazine, an overall length of 7.3 inches and height of 5.5 inches. At its widest point it’s 1.3 inches, at the fully-ambidextrous controls. The slide is also slightly wider to handle the hotter round.

The VP40 has slide and magazine catch levers on the left and right sides of the gun. It uses a paddle release which is increasingly popular in the U.S., no small part in thanks to the VP9 and other HK pistols. For all the details and specifications visit the new VP40 product page.

These are the same prices for the VP9 which commonly list in the mid $500- to $600-range, making them extremely competitive with other common service pistols. For only $100 for the law enforcement package is particularly attractive as night sights alone often cost more than $100 and extra magazines aren’t always cheap or easy to find.

You won’t have to wait long for the next Heckler & Koch pistol to hit stores. HK has said they expect the pistols to be in dealer hands today, June 12.