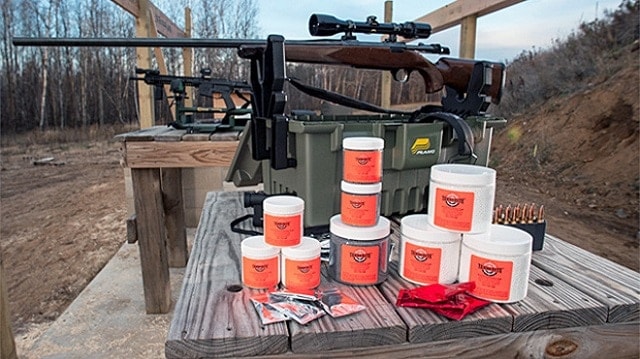 Following a warning issued by the Bureau of Alcohol, Tobacco, Firearms and Explosives on the potential dangers of misusing exploding targets, Guns.com spoke with Tannerite’s CEO, Dan J. Tanner.

The advisory, released in conjunction with the National Explosives Task Force, was posted by the agency this week to social media. In it, ATF cautions against placing exploding targets in, under or next to objects that can produce shrapnel, not following manufacturer guidelines, combining multiple targets, and adding materials to the mixture.

When asked for comment Thursday, Tanner, head of Tannerite Sports, the company most often associated with binary reactive targets, was candid about the safety of his products.

“Factually, there has never been an injury by shooting Tannerite as recommended on all written and published literature and instructions,” Tanner said.

The product, a proprietary non-explosive mixture of ammonium nitrate and aluminum powder that, when mixed, produces a report and visual effect if struck by the impact of a high velocity bullet, is perfectly safe if used as directed, contends Tanner.

“The bullet screaming out of a high power rifle is far more dangerous than the target it hits,” Tanner said. “It all comes down to the end-users responsibility to shoot safely. If you don’t want something damaged in the exact vicinity of the rifle target, you shouldn’t be shooting a high-powered rifle in that direction to begin with. The bullet is only as dangerous, or safe, as the person behind the rifle.”

In fact, Tanner pointed out, he has partnered up with federal agencies to produce safety guidelines for sale and use of Tannerite.

Further, Tanner said, those who would seek to use his targets for nefarious purposes are barking up the wrong tree, as are those who would characterize his compounds as dangerous explosives.

“No terrorist has used Tannerite to harm anyone, because the unique properties of the product simply does not lend itself to such use,” he said.

“It is reactive rifle target for long range exercise. Altering them or using more than is in the target containers is a violation of our recommendations as well as a violation of law.”

Finally, Tanner stated that his products have been on the market for years and meet all regulatory guidelines. The company sells half-pound and one-pound targets but only sells two-pound targets to professionals.

However, this has not stopped lawmakers from attempting to pull exploding targets off the shelves.

A little-known measure in Louisiana last year to regulate large quantities of binary target indicators the same way as high explosives, was made law by Gov. Bobby Jindal.

After the original text of the explosives bill was modified to only regulate quantities of binary target compounds in excess of five pounds, it sailed through both chambers of the state legislature without a single lawmaker voting against it.

Such regulation is overreaching argued Tanner, who termed the original Louisiana proposal, “ridiculous,” at the time.

“Tannerite is already regulated. Its use is limited to a long range shot-indicator, for personal use non-commercial shooting exercise only,” Tanner said.

Read the full ATF advisory on the potential dangers of misusing exploding targets.