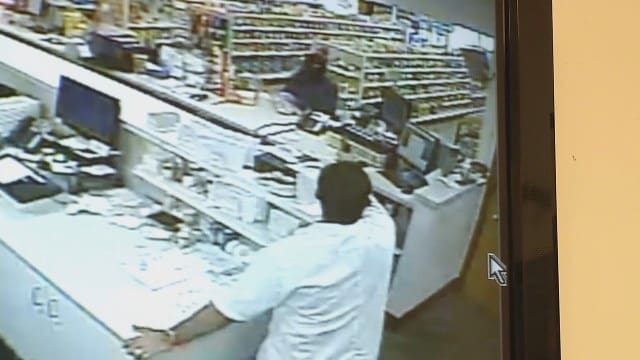 An attempted robbery at a Kansas City, Missouri, pharmacy Tuesday was thwarted by the pharmacy owner and his .45.

Local media reported that a woman entered Spalitto’s Pharmacy around noon carrying a bag and wearing a mask. She told an employee she had a gun and demanded oxycodone. The employee in turn went to the pharmacist and owner, Pete Spalitto, who was busy talking with another employee. Spalitto, not realizing what was happening at the time, initially shushed the employee away, but then the woman told Spalitto she wanted the pills.

Without hesitation, Spalitto walked to the other end of counter and grabbed a .45-caliber handgun, and and aimed the gun at the woman’s head.

At that point, the woman fled from the business, but Spalitto followed her and chased her for as long as he was physically able. Spalitto jokingly explained that he pulled a hamstring during the pursuit, so the woman got away. He regretted not being able to catch her.

No shots were ever fired, no one was injured and the woman left empty-handed, but the surveillance video captured images of the suspect, as well the maroon SUV which was believed to be her getaway vehicle. The vehicle could be seen speeding out of the parking lot as Spalitto chased the woman out of the shop.

Police later recovered the bag the woman carried into the pharmacy, which contained only a fake, plastic gun.

A similar robbery occurred at another pharmacy earlier that morning around 3:30 a.m., and authorities are working to determine whether the two may be related. This marked the fifth pharmacy robbery around the city in just over a month.

Spalitto said he has had a gun at his business for about 20 years for the protection of himself, his family, who often works with him, his employees and customers. He said he has sympathy for those who work in the chain pharmacies and aren’t allowed to carry a firearm.

“It doesn’t take a rocket scientist to figure out if you’re selling drugs in this day and age you should have a gun on you,” he said.