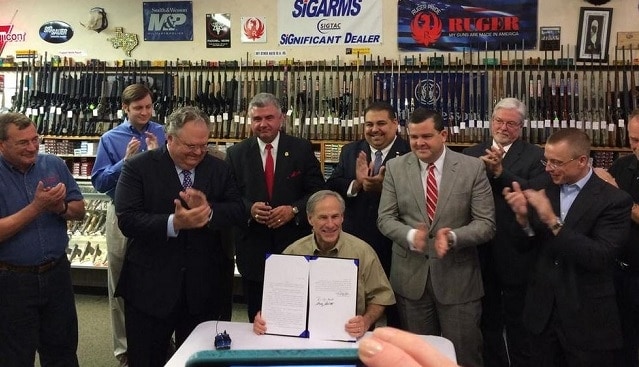 A long and sometimes bitter struggle this session to reform gun rights in the Lone Star state came to a head at a shooting range in Pflugerville where Gov. Greg Abbott signed two measures into law Saturday.

The brief event was broadcast live over Periscope from Red’s Indoor Range just outside of Austin.

The first term governor, ushered in on a wave of GOP votes in last year’s mid-term elections, had long promised to sign open carry legislation placed before him.

However, both bills saw their share of compromises in the journey through a gauntlet of opposition at the Capitol in Austin to the gun counter at Pflugerville.

Signed were House Bill 910, concerning the state’s open carry rights. Individuals licensed to carry a handgun will be able do so in public.

Narrowly escaping a filibuster to at the end of May to reach Abbott’s desk, the bill only made it out of the legislature after dropping language disliked by metro police chiefs in the state that would have limited the ability for law enforcement officers to stop lawful open carriers.

The other measure to earn Abbott’s signature is Senate Bill 11 that will allow for licensed holders to concealed carry their handguns on college campuses, including all buildings owned or leased by the universities, such as dormitories.

Meanwhile, gun control groups to include the Coalition to Stop Gun Violence and Moms Demand Action, who were very vocal in the opposition to both of the gun reforms signed into law, took to social media to decry Abbott’s signatures Saturday while citing a shooting outside of Dallas Police Headquarters which occurred only hours earlier.

It was not evident if the DPD shooting involved either the open carry of firearms or took place on a public university campus.

The open carry of modern handguns will be legal in Texas for those with permits on Jan. 1.2016, whereas most of the tenets of the campus carry legislation will not take effect until Aug. 30, 2016.