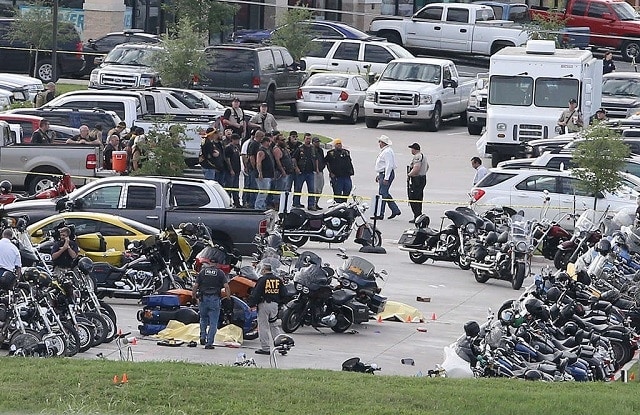 The event that erupted on May 17 left nine dead, 18 wounded and 239 detained, prompting a massive police response that included local, state and federal agencies.

Authorities with the Waco Police Department late Friday provided an update into progress made thus far in the search for answers to just what happened that day.

“As of this release, there are a total of 44 shell casings recovered from the Twin Peaks scene. This number does not include the revolver rounds fired by non-law enforcement shooters,” advised the update.

Included in the count were 12 casings attributed to police-issued .223 caliber rifles. Authorities said there were 16 uniformed Waco Police Department officers on the scene that day to include an assistant chief and a “Tactical Element” of SWAT officers equipped with suppressed, select-fire rifles.

Police caution that, while the rifles were capable of full-auto fire, they were used in semi-auto only during the event by three Waco officers “who discharged their weapons in defense of their selves or a third party.”

The officers in question were the only WPD personnel who fired their weapons that day and are on administrative duties pending the outcome of the investigation.

This contrasts with reports earlier this week from an eyewitness, a Marine, who told local media he heard a small number of pistol shots, followed by a “barrage” of “overbearing suppressing fire” by M4 assault rifles used by the police.

While earlier reports erroneously gave the number of recovered weapons as being over 1,000 of all kinds, which was later reduced to about 300 on May 21, the numbers are on the rise again.

“The weapon count at this point in time is at least 475 weapons. This includes 151 firearms, 12 of which were long guns,” reads the statement. “The weapons recovered include: knives, brass knuckles, batons, tomahawks, weighted weapons, a hatchet, stun guns, bats, clubs, a machete, a pipe, an ax, pepper spray, and a chain.”

Authorities said the firearms recovered have been transferred to the Bureau of Alcohol, Tobacco, Firearms and Explosives for analysis while outside labs are conducting ballistics reviews.

Police caution the weapon count has continued to rise due as hidden weapons – some found buried hastily in the grass through the use of metal detectors – are recovered from a crime scene they describe as still active and has produced in excess of 1,000 pieces of evidence.

Also impounded were 130 motorcycles and 91 other vehicles, of which about half have been released.

Of the more than 200 individuals detained after the violence, 177 were arrested and, according to the Waco Tribune as of midnight Wednesday, 106 have been released on bonds that varied from between $25,000 to $1 million.

Waco Police said this could change as search warrants are still being issued and the investigation, which has 21 officers and detectives assigned to it, is ongoing.