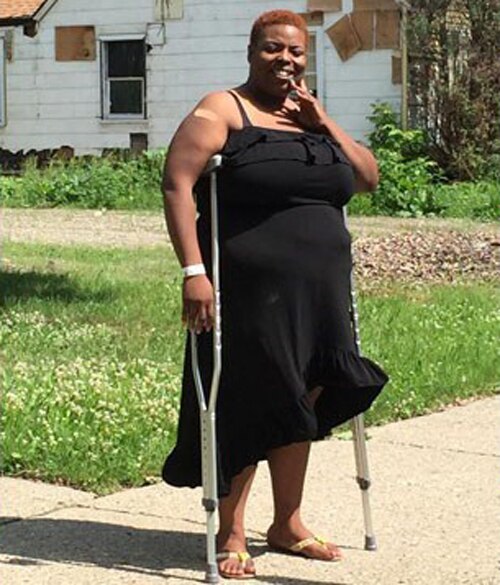 Dietta Gueye can be described as a fighter who beat breast cancer two years ago and scared away five men who broke into her house last week. (Photo: My Fox Philly)

Two women, both armed with handguns, fought back during two separate attacks in Detroit last week.

One woman was targeted for a carjacking and the other was the victim of a home invasion when five men broke into her house, and while all of the suspects walked away empty-handed, at least one also walked away with a gunshot wound.

Dietta Gueye was asleep around 2:30 a.m. on June 9 when she heard tapping on a window, followed by the sound of glass shattering. She said the five men, two of who were armed, avoided the back side of the house where her dogs were kept, but unscrewed the porch light and gained access through a window on the front side of the house instead.

However, the suspects were unaware that Gueye had been the victim of a burglary three years ago and now sleeps with a Glock 9mm.

“Imagine being woke up out of your sleep with somebody with a gun in your face,” Gueye told a local Fox affiliate. “My first reaction was survival. My first thought was shoot.”

She grabbed her Glock and initially waited, stood still with her gun in hand and the bedroom door open, but when she saw the suspects, she opened fire. The gunshots sent the suspects fleeing from her home, but one returned fire, striking Gueye in the thigh. She said the bullet went straight in and out, and other than being a little sore, she now feels just fine.

Diane Swift, Gueye’s mother, said she’s both proud of her daughter and thankful that she wasn’t hurt worse.

“She got injured, but we can patch that up,” she said.

Gueye told The Detroit News that once something like this happens, you continue to have it in the back of your mind that they may come back. She said she hopes they’ll think twice before returning, but if they don’t, she’ll be ready for them.

“It’s terrible people have to live like that; violated in their own homes,” Swift added. “That’s scary. We’re dealing with a different species of people out here.”

Nonetheless, Gueye is just glad she was able to defend herself.

“If I didn’t have that gun, who knows what would’ve happened? Torture, beating,” she said. “There were five of them.”

Police indicated that they believed one of the suspects may have been hit because there were no bullets from Gueye’s gun found at the scene, but the suspects have not been located at this time.

The day before the break-in at Gueye’s house, Tamika McNeil, who also lives in Detroit, had just come home when she was approached by a man with a gun. He wanted her car, but she wasn’t willing to just hand it over. McNeil, who has a concealed carry license, was packing a pistol and shot her assailant. He fired back, but failed to strike his intended target.

“I heard at least five to six gunshots and then a vehicle speed off,” a neighbor, who did not wished to be identified, told reporters. “I didn’t see anything because when you hear gunshots you don’t run looking.”

Some time later, the suspect, who was discovered to be just 16 years old, showed up at a local hospital suffering from a gunshot wound. He underwent surgery and is now in police custody.

Sabrina McNeil, Tamika’s sister, said the family is thankful that her sister was carrying a gun, and that the outcome could have been very different had she not been.

“It’s scary seeing everything that’s going on and seeing it happen to your own family,” Sabrina said. “It’s scary.”

Still, Gueye believes women need to learn to protect themselves.

“I just want to encourage a lot of women to get their CPL,” she said. “And don’t be scared if you’ve got to protect yourself and your life. Do not be scared.”