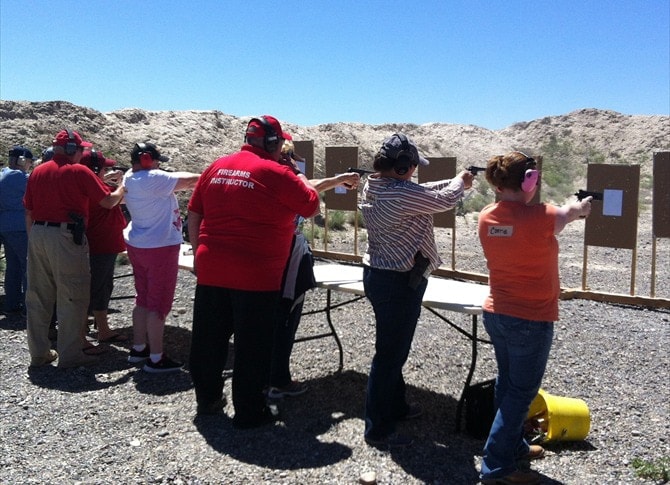 Instructors said the ultimate goal was to have each woman feeling comfortable shooting her own handgun. (Photo: KPVI)

A firearm training class held in Idaho Falls over the weekend was conducted specifically for women, some of whom were shooting a gun for the very first time in their lives.

Southeast Idaho Practical Shooters and Snakeriver Firearms Instructors teamed up to teach the ladies about safety and handling, according to a report by local media station KPVI, who also participated in some of the training. The class, which is held annually and qualifies women to apply for an Idaho Basic Concealed Weapons Permit, covered basic essentials like how to load and unload a firearm, as well as marksmanship. Instruction came through power-point presentations and lectures before the skills were practiced on the shooting range.

Participants brought their own handguns to the class, but also had the opportunity to test out different types of guns and ammunition. One of the goals of the class, according to certified NRA instructor Lou Lang, was to help each woman to feel comfortable and confident with the gun she had.

Debbie Hackley, who had never shot a gun prior to attending the class, said she thinks it’s important for women to know how to defend themselves, and said the class helped to teach her both safety and respect for the tool. Hackley said that now knowing how to handle a gun helps her feel secure.

Amanda Bohnan had never handled firearms before she attended the class either and admitted that she was initially a little apprehensive. But after some instruction, she thought, “Okay, I can do this.”

Although it wasn’t Krystal Grover’s first time shooting a gun, it was her first formal firearm training session. She said her husband persuaded her to take part and extend her knowledge in a setting surrounded by other women.

“He wanted me to get more comfortable and thought that, being with other women, I would be more comfortable asking questions and being familiarized with some things and getting more practice shooting,” Grover said.

And, according to LaRosa, that was ultimately the goal of the class – to teach the ladies be safe, feel comfortable, improve marksmanship and know they can protect themselves if need be, which according to a study conducted earlier this year by the National Shooting Sports Foundation, is the primary reason women purchase firearms.

The study showed that while the gun industry still remains predominately male, women make up the fast growing demographic in the industry.

The women who were polled said they had spent, on average, over $1,000 on guns and accessories, and about half said they planned to purchase another gun within the next 12 months. In addition, 73 percent of the women who participated in the survey said they had taken some sort of training class and 42 percent obtained a concealed carry permit.