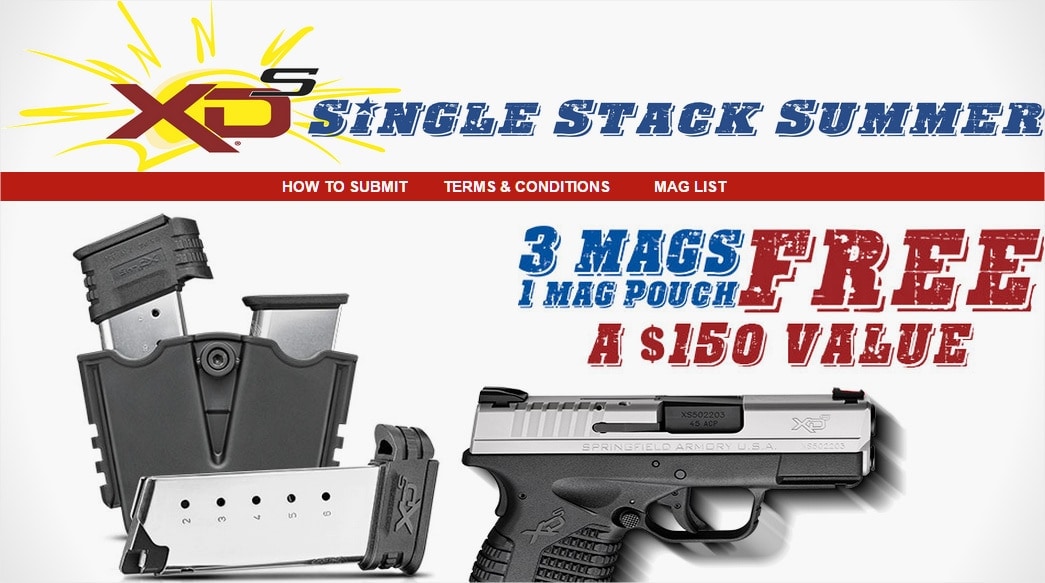 If you’re looking to slim down your concealed-carry pistol this summer this could be just what you’ve been waiting for. (Photo: Springfield)

Springfield Armory is having another “Gear Up” promotion with the 2015 “Single-Stack Summer.” This year Springfield is giving away three free magazines along with a double mag holster with every XD-S sold through Aug. 31.

The promo has been back-dated to include sales of XD-S pistols starting on June 1. Springfield’s pistols have always been a solid value but with the Gear Up program they’re downright steals with about $100 — street value — in goods with this year’s promotion.

The XD-S is a newer single-stack pistol offered in 9mm Luger and .45 ACP in a wide spread of finishes and barrel finishes, with flush-fitting and extended magazine options. This year Springfield added a third “Mid-Mag” magazine giving users the option of using +0, +1 and +2 magazines.

The Single-Stack Summer giveaway includes one magazine of each size in addition to the extra mag holster, for a total of five mags including the two that come with the gun. Springfield has packaged XD-S pistols with a few different mags over the years but now they come standard with one flush and one mid-mag.

Buyers can sign up for the bonus gear by mail or online through the Single-Stack Summer website.

XD-S pistols have a base capacity of 5+1 in .45 and 7+1 in 9mm and are offered with a waxy black Melonite or satin stainless finish. Springfield recently launched models with service-length 4-inch barrels for people who want something thin that doesn’t sacrifice performance at the muzzle.

This is a solid deal all-around. Even if you don’t care for all three sizes of magazines there’s no arguing with free. If you’re considering a new single-stack pistol that carries a little lighter and a lot cooler this summer than this might just be the excuse you’ve been looking for.