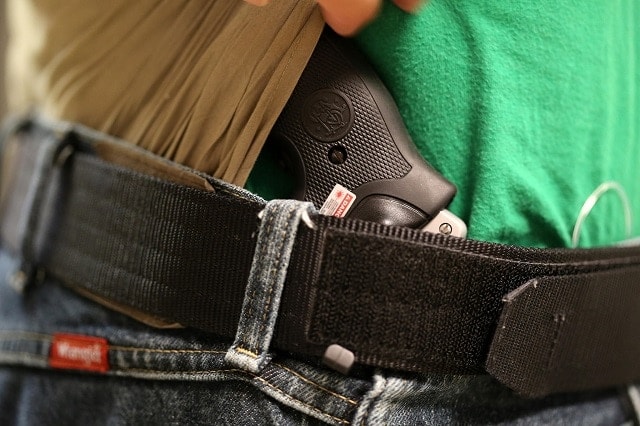 California’s entire regulatory scheme for issuing concealed carry permits could be up for grabs in the Peruta case, scheduled for rehearing Tuesday.

The Peruta case, which challenges the need for carry license applicants to provide a heightened “good cause” is beginning its en banc retrial Tuesday in San Francisco.

The retrial concerns the reversal by a three-judge panel of the U.S. 9th Circuit Court of Appeals last February in the case of Edward Peruta, who sought a license to carry a handgun from San Diego Sheriff Bill Gore but was repeatedly denied over the agency’s strict may-issue policy because he could not show good cause as to why he felt the need to carry a gun other than a desire for self-defense.

Just eight states, including California, are currently considered may-issue states, and the ruling last year – if upheld – could provide a legal vehicle to strike down such policies.

The important win for gun rights in Peruta led to a flood of similar approvals by the 9th Circuit in cases in Yolo county and Hawaii. However, as those cases were concluded in non-citable memos rather than in independent rulings, they rely on Peruta remaining in effect to count.

The rarely granted en banc retrial will take place in San Francisco in front of an 11-judge panel drawn from the 29 active members of the Circuit. The California Police Chiefs’ Association and the California Peace Officers’ Association, powerful law enforcement lobby groups, requested the retrial, which was granted in March.

The panel will consist of only two of Peruta‘s original three-judge panel, Chief Judge Sidney Runyan Thomas, an appointee of President Clinton who dissented in the initial ruling, and Consuelo María Callahan, an appointment of President George W. Bush who ruled in favor of Mr. Peruta last May.

The other nine judges are largely a mix of appointments by Democratic Presidents, with the ghosts of Clintons past appearing heavily on the panel:

The legal history on the case is vast, dealing with more than 150 different complaints, motions, filings and appeals dating back to 2009. This includes numerous briefs from such noted legal minds as David Kopel and former U.S. Solicitor General Paul Clement.

Since March, when en banc was ordered, dozens of amicus briefs from at least 21 state attorney generals, gun rights groups and public policy research organizations have been filed in support of Peruta, while briefs from gun control groups such as Everytown and the Brady Campaign have been filed in opposition.

The stakes in the case are high, as if the court finds for Peruta and the other claimants in the case; it could unleash an avalanche of new concealed carry permits in the Golden State.

As of Dec. 31, 2014, California had just 70,593 residents with active concealed carry permits for a state with a population of over 38 million. Texas, with a smaller population but much more lenient shall-issue policies, enjoys over 840,000 permit holders.

Further, within California itself, polices vary so widely between sheriffs that in San Francisco County, with a population approaching one million, there are only two permit holders. To contrast, Fresno County, who also has nearly the same number of residents, has 7,647 active permits and another 626 pending. Should Peruta lose, these individual polices could likely remain in place.

Perhaps Chief Judge Thomas, in his dissent last year, said it best when he wrote that Peruta’s case, “not only strikes down San Diego County’s concealed carry policy, but upends the entire California firearm regulatory scheme.”

No matter how the panel decides, it is expected that Peruta will continue on to the Supreme Court, which has notably declined to hear petitions on important gun rights cases in recent months.

“Peruta could be the most important gun rights case since Heller and McDonald, if the Supreme Court will allow it,” UCLA Law Professor Adam Winkler told Guns.com Tuesday.

“The justices have refused so far to hold unambiguously that the Second Amendment protects the right to carry arms in public. Although this issue has arisen in case after case across the country, and the Court has received petitions to hear the issue several times, the Court has remained on the sidelines. Indeed, the justices have seemed reluctant to reenter the Second Amendment fray; last week’s refusal to hear the San Francisco gun storage case was just the most recent illustration,” explained Winkler.

“Many Second Amendment lawyers are eager to find out if the justices will take Peruta when the time comes,” he said.

Guns.com caught up with CD “Chuck” Michel, West Coast counsel for the National Rifle Association about the importance of the upcoming en banc retrial of the Peruta case, which he helmed.