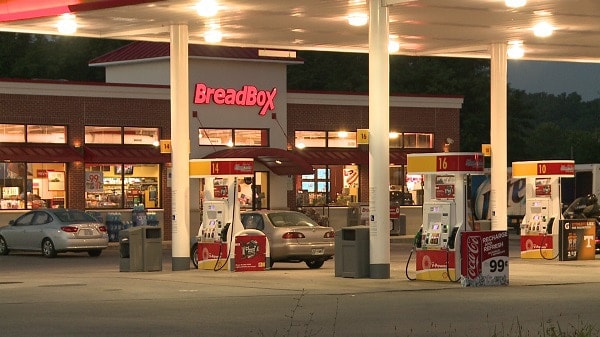 In less than one hour, two Bread Box stores in Knoxville had been robbed at gunpoint, but the one of the robberies did not end well for the teen suspect. (Photo: Local 8)

An attempted robbery at a Knoxville, Tennessee, gas station early Monday morning was foiled when an armed citizen witnessed the attack and decided to intervene.

The man, whose name has not been released, was sitting in his vehicle that was parked outside of the Bread Box around 2:35 a.m. while his friend was working as a clerk inside the store. The man noticed the suspect walk into the store while carrying what was later determined to be a 9mm handgun. Upon seeing this, the friend grabbed his own gun, also a 9mm, and followed the suspect inside, according to a release by the Knoxville Police Department.

As the friend entered the store, the suspect was forcing the female clerk behind the counter, but the friend fired a single shot at the would-be robber and struck him a single time.

When police arrived a few minutes later, the suspect was pronounced dead. He was later identified as 18-year-old Tamon J. Stapleton.

The gun used in the attempted robbery was recovered at the scene and police discovered the serial numbers had been scratched off, likely indicating that the firearm was stolen. Authorities are now working to determine the origin of the gun.

Reports indicate that the friend did not have a concealed carry permit, but under a Tennessee law that went into effect last July, he was legally permitted to have firearm in his car without a permit. Nonetheless, authorities confirmed the shooting was justified and he will not face any charges, WBIR reported.

“You are allowed to defend yourself with both reasonable and necessary force, and the defense of another is appropriate should somebody else that you’re with or acquainted with also be placed in similar danger,” expained Knoxville attorney Don Bosch.

Neither the clerk nor her friend were injured during the incident.

Less than an hour after police received the call about the robbery and subsequent shooting, authorities received another call about a second robbery at a different Bread Box location, local media reported. A male allegedly entered the store with a handgun and demanded the clerk hand over the cash. The clerk complied and the suspect took the money and left.

The clerk was uninjured and was able to get a description of both the assailant and the vehicle he was driving.

Some time later, police came across a vehicle matching that description at a nearby Burger King. The driver fit the description of the robbery suspect and upon searching the vehicle, officers found stolen cigarettes, the cash from the store and the clothes that were believed to be worn during the robbery. Authorities also found the gun used, which turned out to be a BB gun.

The suspect, identified as Psalms Bailey, was arrested and charged with aggravated robbery.

Authorities do not believe the robberies were related.