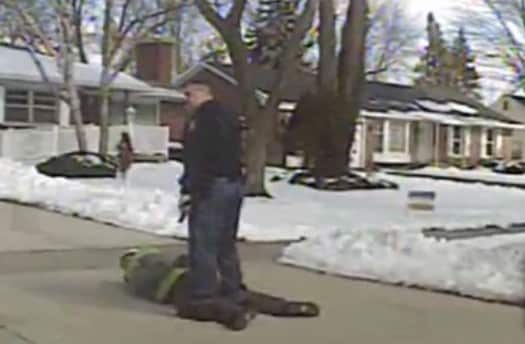 Johann Deffert claimed he was assaulted and his rights were violated when he was falsely imprisoned. (Photo: M Live)

The U.S. District Court of Michigan ruled earlier this month that law enforcement officers have the authority to stop an individual if the person is open carrying a firearm – to do so is not a violation of any constitutional rights.

The decision was the result of a lawsuit that was filed in December 2013 by Johann Deffert following a confrontation with two officers in Grand Rapids nine months prior.

On the day in question, Deffert was walking down a street with a holstered FNP-45 tactical pistol when a woman called 911. The caller seemed rather surprised to learn from the dispatcher that open carry is legal in the state of Michigan, but as the conversation progressed, the woman explained to the dispatcher that although Deffert wasn’t threatening anyone, she found his appearance alarming, in part because she thought he may have also been wearing camouflage.

Officer William Moe was the first to arrive on the scene and his interaction with Deffert – which lasted a total of 14 minutes – was captured by the officer’s dash cam. Moe indicated he believed Deffert may have been suffering from mental illness, as he appeared to be “talking to nobody” as the officer drove up. It was later determined that Deffert was in fact boisterously singing the song “Hakuna Matata” from the Disney film “The Lion King” as he strolled down the road.

Although Deffert remained cooperative and respectful, Moe appeared to be taken aback when the man attempted to school him on the legalities of open carry in the state. Almost immediately, Moe detained Deffert while the officer ensured he had no mental or criminal background that would prohibit him from legally carrying a gun. By this time, a second officer, Timothy Johnston, had arrived on the scene.

In the end, Deffert was set free, as he had not violated any laws and did nothing wrong. However, Grand Rapids Police Sgt. Steve LaBrecque recommended to Moe’s commanding officer, Capt. Pete McWatter, that Moe “would benefit from some additional training in handling ‘open carry’ issues.” In addition, the 14-minute encounter ultimately led to the federal lawsuit being filed several months later.

In the complaint, which was filed against the city, Police Chief Kevin Belk, Sgt. LaBrecque, Moe and Johnston, Deffert alleged that his constitutional rights were violated and he was assaulted and falsely imprisoned. According to the court documents, the legality of open carry in the state was never in question, only if law enforcement had the authority to detain an individual simply because they were open carrying a firearm.

U.S. District Judge Janet Neff determined that yes, officers do have that authority. Neff said the officers were “justified in following up on the 911 call and using swift action to determine whether [Deffert’s] behavior gave rise to a need to protect or preserve life … in the neighborhood.”

Robert Stevenson, executive director of the Michigan Association of Chiefs of Police, told USA Today,  that acts of open carry, which are increasing in the area, are causing an unnecessary rift. He said those who participate in open carry are attempting to draw attention to themselves and “needlessly alarming people.” He added that people aren’t generally comfortable with or accustomed to the idea of seeing someone with a gun walking around near places such as schools.

“It puts the police in a position where we don’t know what their intent is, so they’re going to approach this person, not realizing that the intent is to hurt somebody,” Stevenson said. “It’s a terrible situation what these people are doing, somebody is going to get hurt.”

However, Michigan state Sen. Mike Green said state lawmakers are being pushed by school administrators to change the laws, so Green proposed a law allowing concealed carry permit holders to carry guns into schools as long as they remained concealed. The goal of the updated legislation is to cause fewer people alarm and anxiety by keeping legally owned firearms hidden rather than out in the open. Green said he expects opposition, as some schools want to remain completely gun-free.

“I understand that but I believe in our right to arm ourselves,” he said.